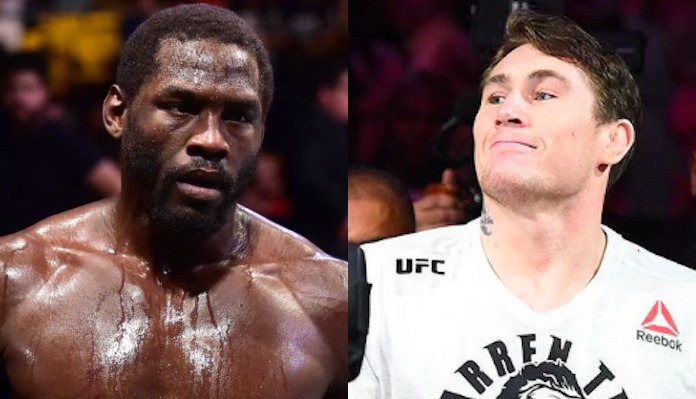 Jared Cannonier will not be fighting Darren Till or serving as a replacement for next months UFC 248 main event.

The middleweight standout, Cannonier, was originally slated to square off with former division champion Robert Whittaker at the March 7 event in Las Vegas. However, ‘The Reaper’ was forced to withdraw from the contest, linking Darren Till to fill in as a possible replacement.

At the very least, it was expected that Cannonier would serve as a replacement fighter for the UFC 248 headliner between Yoel Romero and current middleweight champion Israel Adesanya.

Unfortunately for fight fans, Jared Cannonier will no longer be an option for UFC 248.

”The Killa Gorilla” took to Instagram where he revealed that he had suffered a pectoral injury which will force him out of action for some time.

In the post, Cannonier took time to take a shot at Darren Till. Check out the post and transcript below:

“Darren Till I’m happy you found some courage and finally decided to accept the fight. On Monday. But only two days after I tore my left Pec completely. When it happened on Saturday 7th February, I was in Houston to talk about how you wouldn’t accept the fight. Now had you said yes when they offered, instead of dodging the fight presumably, I would have been in PHX gettin ready to beat yo ass. I’m not blaming you but I kinda am. Anyway, I’m gettin surgery on Tuesday. If you’re still around in the MW division, I’ll hit you up in the fall. P.S. tell your little minions to stop tagging me in your weird ass posts.”

The Liverpool native, Till, would respond to the post with the following reaction.

Darren Till made his middleweight debut at November’s UFC 244 event where he scored a decision win over former interim title challenger Kelvin Gastelum.

As for Jared Cannonier, the 35-year-old is coming off three straight wins, his latest being a knockout victory over perennial contender Jack Hermansson.

What do you think should come next for Darren Till now that Jared Cannonier is sidelined with an injury? Sound off in the comments section Penn Nation!