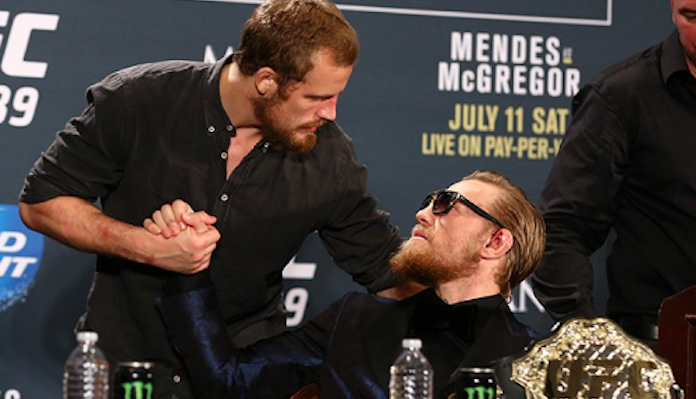 Conor McGregor brought in a lot of top talent to help him prepare for his UFC 229 title fight with undefeated UFC lightweight champion Khabib Nurmagomedov. One fixture of McGregor’s past training camps that wasn’t a part of these preparations for the Russian champion, however, was Icelandic welterweight contender Gunnar Nelson.

Speaking to the media ahead of his UFC 231 fight with Alex Oliveira, Gunnar Nelson explained why he wasn’t a part of Conor McGregor’s training for Khabib Nurmagomedov.

“It was very unfortunate, obviously, that I couldn’t join the camp because of my knee” he said (via The Mac Life). “I could have maybe done it right at the end, but he had everything planned out and he had his guys there. But it was a little bit difficult to see.”

While Gunnar Nelson was unable to help Conor McGregor prepare for his recent fight with Khabib Nurmagomedov, he promises that he will be by the Irish MMA star’s side if he fights the Russian champ again — and he believes this is likely.

“I think for the next one — and I believe there will be another one at some point — I’ll be there for his camp for sure.”

Gunnar Nelson also claimed that he noticed a few things Conor McGregor can improve upon in a potential rematch with Khabib Nurmagomedov — though he’s sure McGregor has noticed these things too.

“Yeah definitely [I can see some things],” he said. “I’m sure he can as well, and John [Kavanagh], our coach.”

“I think there was a bit too much chase in this fight,” he added. “I’m not going to go into detail about Conor will beat beat Khabib.

“I’m a different fight than Conor, so my strategy would probably be a bit different than his, but you don’t want to sit in [Nurmagomedov’s] world, and guys tend to do that a little bit.

“Guys seem to get caught in his world, and that’s his world.”

Do you think Conor McGregor would have benefited from having Gunnar Nelson in his training camp ahead of UFC 229?