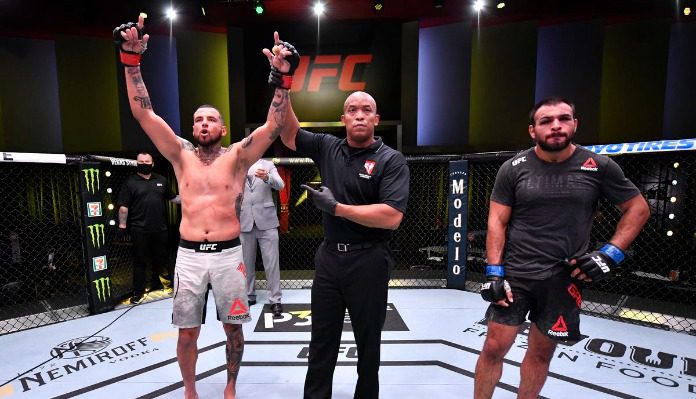 Green fought Rodriguez on short notice in his UFC debut which was his first fight in two years. It was a competitive fight but one Green lost and since then, he has rallied off two straight wins beating Phil Rowe by decision and TKO’ing Yohan Lainesse last weekend. For Green, he says his in over Lainesse went exactly how he thought.

“Minus me getting dropped, that is exactly how I saw the fight playing out,” Green said to BJPENN.com. “I was avoiding his power shots as much as I could but he threw a good right hand over my jab and landed on my sweet spot. But, going into the fight, I figured he would try and knock me out in the first and just try and move around, and once he got tired to pour it on him and finish him which is what I did.”

Once Green started to land some big shots he saw Lainesse begin to shell up and once that happened he kept landing shots and he knew the fight was over.

“As soon as I hit him and he covered up I knew it was over and then went after it and the ref stepped in to stop it,” Green said. “I’m extremely happy with my performance and it’s what I expected from myself.”

With Gabe Green now being on a two-fight win streak, he says he wants to fight Daniel Rodriguez next.

However, if he doesn’t get the rematch, the plan for Green is to fight again in July and then again by the end of the year in hopes of ending 2022 as a ranked fighter.

“If the UFC gives him to me, I’ll take him, but I’m not sure I will get it. He was ranked for a bit, but luckily he has not fought for a bit and if he doesn’t keep fighting and I keep winning maybe I do get the rematch. If it isn’t him, I don’t care that much,” Green said.

If Green does get the rematch against Rodriguez he is confident the fight goes much differently.

Would you like to see Gabe Green vs. Daniel Rodriguez 2?