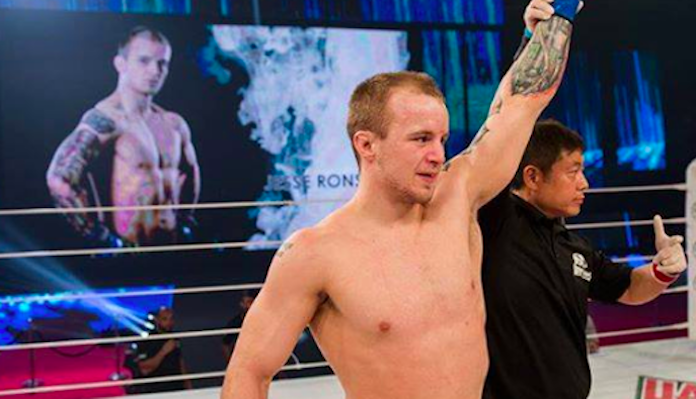 After being cut by the UFC in 2014, Canada’s Jesse Ronson was set to make his return to the promotion to take on Diego Ferreira at UFC 231 this Saturday. The 32-year-old was stepping in on just 10 days notice to fight Ferreira.

Unfortunately, this fight won’t be happening after all, as the Canadian was pulled from the card for being too heavy ahead of the weigh-ins.

However, Ronson believes he should have never been pulled from the card, and that he was only pulled because he decided to be honest. He could have lied about his weight, but he was forthright with the commission and UFC matchmaker Sean Shelby, and in the end, he got burned because of it.

He’s been told he’ll never fight for the UFC again.

“This is when it is going to get real f***ing shifty and shady,” Jesse Ronson told BJPENN.com. “The Ontario commission called me said ‘how are you doing, we heard about the short notice (fight) we are glad to see you back.’ Obviously, the Ontario commission knows me so they go ‘what’s your weight at?’ I told the head of the commission straight up what my weight was, and what I thought my weight was going to be when I got there. They said ‘that’s a f***ing big cut, Jesse, we are not too sure about it.’ Well, I was like ‘well if you guys are down with it, if the UFC seems cool with it, I’d love to do a catchweight.’ I’m like, ‘If you could suggest a catchweight to them at like 160’. They were like ‘oh, we are 100 percent down for catchweight, we’ll do that. I’ll suggest it to the UFC right now.’

“After that phone call, I called my manager and said ‘hey, the commission just called me and said they are down to do a catchweight if the UFC is alright with that’. He said ‘No don’t do a catchweight. If you say you will do a catchweight, Sean Shelby will cancel the fight right now and find somebody else.’ I was like ‘well f**k, they have done catchweights before so I’m not sure why Sean Shelby wouldn’t let me do a catchweight.’ I messaged Sean and I said, ‘okay man, I’ll do what I can and jump through the hoops and there isn’t going to be a need for a catchweight.’ He said ‘okay cool just keep your weight down so there are no hassles. I don’t want to deal with any hassles.’ I said ‘fine.’

“Then s**t wasn’t going my way. I talked to the UFC’s nutritionist and he said ‘we are going to need a catchweight because realistically we are not making 156. If you want to do a catchweight do it now.’ That’s why I made the post, to be honest about it and tell them straight up you aren’t going to make it. You don’t want to look like an idiot and miss weight and them cancel the fight. Or you fight like s**t. I was prepared to do a catchweight and give Diego 20% of my purse anyways. Even if I make the catchweight just to give him the incentive to do the catchweight. We didn’t even get that far into negotiations before I got the f***ing shaft.”

This was devastating news for Ronson, who only wanted to prove he belonged in the UFC. After getting cut in 2014, he’d long hoped to make it back, and was so close to doing so this week.

In hindsight, Ronson believes the UFC would have preferred he just keep his mouth shut and miss weight. He believes that it was his honesty that got him cut, putting an end to a four-fight UFC contract before it even began.

“It was a four-fight deal. They always sign four-fight deals,” Ronson said. “They gave me the bout agreement for this fight against Diego. Then it was a four-fight contract overall which essentially just states your money. They canceled everything. That Tuesday I got called I was up until like 1 a.m. printing off over 100 pieces of paper filling stuff out and signing stuff. Luckily for me, I am licensed in Ontario to fight anyways. For anybody that isn’t licensed in Ontario, good luck. There is so much to do. Then the UFC made me get an MRI, criminal background check. Essentially I was jumping through hoops so Tuesday, Wednesday, Thursday I was stressed to the max.”

What makes Ronson even more upset is the fact that Shelby and the UFC never contacted Ferreira about doing a catchweight. They simply assumed the Brazilian wouldn’t be interested, which Ronson believes is not the case.

“That’s why the UFC nutritionist said to me… he was saying maybe Diego won’t want to cut a lot of weight,” Ronson said. “I was like ‘probably not. He can come meet me face-to-face and I’ll get on the f******g scale right now and tell him what I weigh.’ I would have asked him what weight does he want to fight at, and then if he didn’t want to do it that is when I would say I’ll give him 20 percent if it entices him. Then, let’s talk to the UFC.’

“Sean is like ‘no catchweight, fight’s off, we are rescinding your contract and you are never fighting in the UFC again, I’m done.’ I was like ‘are you f***ing kidding me?’ Apparently they never even asked Diego, Sean just made this decision on his own.”

Now, Ronson is sitting at home with his dreams of fighting in the UFC most likely dashed. He’s hoping that his choice to be honest with the UFC might result in his being given another chance, but he’s not optimistic.

“Maybe some of the UFC Canada staff will talk to Sean and be like ‘well he is very forthcoming at least he is honest.’ Maybe they can get the contract back or maybe they can get him to say maybe the UFC is for me in the future, I don’t know. I don’t know if Sean Shelby has it out for me if he hates me or not.

“I don’t know what I have done to maybe piss him off, but I have gotten vibes that he really doesn’t like me that much.”

In the wake of this unfortunate twist of fate, Ronson is unsure what the future holds. He can always go back to his former home in TKO, but options like Bellator, RIZIN, and ONE Championship all make sense for him too.

“What the f**k am I going to do with my life?” he concluded.