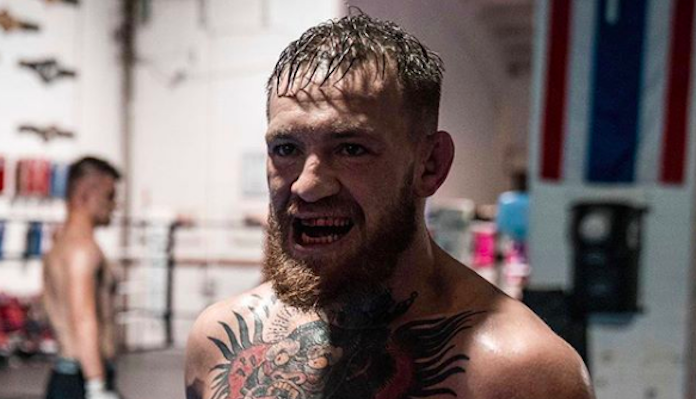 Conor McGregor has accused Michael Bisping of sprinting from his hometown after “they” came knocking on his mothers door.

The pair of former UFC champions, McGregor (22-6 MMA) and Bisping (30-9 MMA), have been sparring online over the past few days. The beef all started after ‘The Count’ shared his take regarding Conor’s online feud with Daniel Cormier. During his assessment, Michael Bisping suggested that ‘DC’ would rip Conor McGregor “limb from limb” in a real fight.

Those comments clearly did not sit well with ‘Notorious’ who proceeded to label the former UFC middleweight champion as a “nobody” while adding that he used to make commission off of Bisping’s fights.

“Bisping is a nobody on Sirius XM,” McGregor Tweeted. “Rushed back to competition after being dropped/strangled and then gets shotgun slept by Gastelum’s left hand. Devastating. Even though I collect commission on all his fights, I still said to the team to pull the Gast fight. I knew it was coming. But hey, 100k! 50k off the top of each fight. I used to say ‘yoink’ every time it hit the account.”

Then, after Bisping joked that McGregor’s legacy was disappearing faster than his tweets, the Irishman decided to throw more gas on the fire with the following photo and caption.

“The only legacy I give a f*ck about is the Legacy 5000 my mother flies around on.” – Conor captioned a photo of Mike boarding a commercial jet.

That post spawned Michael Bisping to respond to Conor McGregor directly with the following message.

“Money doesn’t make you a man little guy. Besides, even if you stood on your wallet I’d still be a bigger man than you.” – Bisping replied to McGregor’s post.

As expected, it did not take long for ‘Notorious’ to counter and he did so with the following claims about Bisping’s past.

Oh you a big man are ya bro ahahah a real man wouldn’t sprint from his hometown after they come knocking on his mother’s door bro. Don’t forget that one big man in the U.S. Crunch time and you dipped.

“Oh you a big man are ya bro ahahah a real man wouldn’t sprint from his hometown after they come knocking on his mother’s door bro. Don’t forget that one big man in the U.S. Crunch time and you dipped.”

It will be interesting to see what comes next in this ongoing saga between former UFC champions Conor McGregor and Michael Bisping. Whose side are you on?