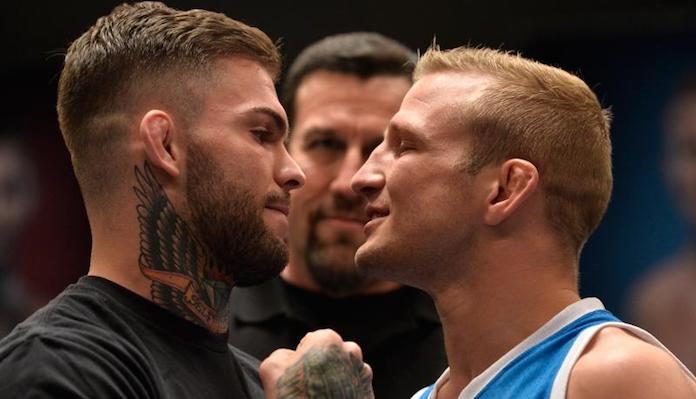 Former UFC bantamweight champion Cody Garbrandt is maintaining that he knew his arch rival TJ Dillashaw was using banned substances. The surprise, Garbrandt says, was not that Dillashaw tested positive, but that it took so long for him to get caught.

Garbrandt believes that Dillashaw was able to evade detection because the United States Anti-Doping Agency (USADA) doesn’t adequately test for EPO, the substance he was using.

“He stole a lot from me,” Cody Garbrandt said backstage at UFC Sacramento (via MMA Fighting). “I wasn’t surprised at all. I was surprised that’s the first time USADA’s ever tested for EPO. I stated back in – what was it 2017? – that I’d like to do more invasive testing. We have to log in everywhere we go. We have to answer the door at 6:00am, piss, urine, blood, everything, write down every supplement we have. There should be no boundaries or picos or this or that. You either cheat or you don’t.

“The first time he got tested for EPO was when he fought Henry? It’s crazy. What are they even testing for. We’re not in there shooting steroids and getting big, they’re doing EPO, they’re doing all that kind of sh*t to cardio base. I knew that. I knew TJ was on that and that’s why I said I wanted more invasive testing. He’s been on it for five, six years. And that’s not the only thing he’s on. There’s a lot of other fighters that are on sh*t too, so if you’re gonna draw a line on what we can do or how we can test – you can’t keep this sample, we can’t detect EPO – then what are we getting tested for? Let it all be legal and let’s all get juiced up and go in there and f*ck each other up.”

What do you think of these comments from Cody Garbrandt?