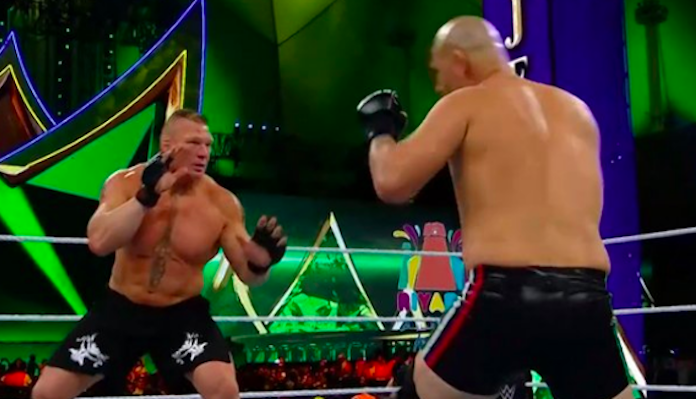 Velasquez and Lesnar met at UFC 121 in October 2010. In what was an upset at the time, it was Velasquez who knocked out Lesnar in the first round to become the new UFC heavyweight champion. The two would never end up rematching in the Octagon, but after both men retired from MMA and went to WWE, the two rivals met in a professional wrestling match at WWE Crown Jewel in October 2019. Lesnar would win that match.

Speaking to MMAFighting.com’s The MMA Hour in a recent interview, Velasquez admitted that when he and Lesnar were in the WWE together, there was “friction” between the two. However, that being said, Velasquez admits that Lesnar is an excellent performer. So while the two may have had to deal with some friction in the WWE stemming from their UFC rivalry, ultimately the men knew they both had a job to do and they both did their best.

“There’s always going to be friction with that. So yeah, there was, but working together. We didn’t work much, but talking to him just for that little bit, I just know where he comes from, just from that little time spent, and I mean very little. I know what he’s about, and I respect him for that,” Velasquez said. “What you see out there when he performs, all that sh*t, he lives it, he breathes it. That’s him. That persona that you see, that’s him out there. That’s his true self. Close quarters, he’s obviously more human, but that’s him, and I saw that.”

Do you think Cain Velasquez will ever return to mixed martial arts or do you think the ship has completely sailed on him being an MMA fighter at this point in his sporting career?