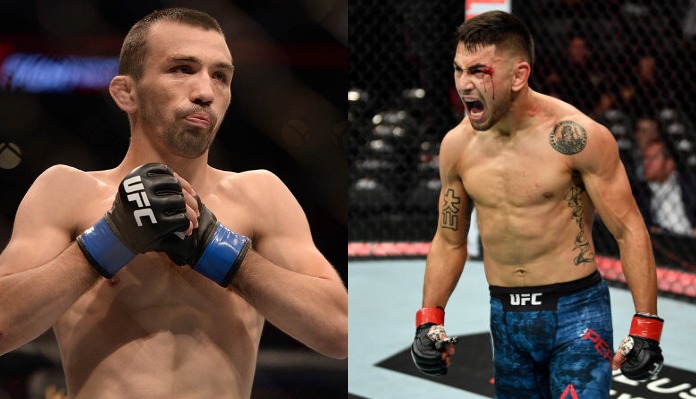 Askar Askarov will face Alex Perez in a potential number one contender bout at UFC Vegas 33.

Multiple sources have informed BJPENN.com that Askarov and Perez will fight one another on July 31 at the UFC Apex in Nevada. Contracts for the fight have already been signed, the sources revealed.

Askar Askarov (14-0-1) is coming off a decision win over Joseph Benavidez at UFC 259 in what is the biggest win of his career. However, the second-ranked flyweight came in heavy for the scrap weighing in at 127lbs. In the UFC he’s 3-0-1 with his other two wins coming by decision over Alexandra Pantoja and Tim Elliott. In his promotional debut, he fought the now UFC flyweight champ, Brandon Moreno to a majority draw. He’s also the former ACB flyweight champ.

Alex Perez (24-6), meanwhile, suffered a first-round submission loss to Deiveson Figueiredo back at UFC 255 in November for the flyweight title. Before the setback, Perez was on a three-fight winning streak with wins over Jussier Formiga, Jordan Espinosa, and Mark De La Rosa. The fourth-ranked flyweight contender is 6-2 in the UFC and became the first person to fight on the Contender Series to fight for a UFC title.

With Brandon Moreno just winning the title on Saturday at UFC 263, the winner of Askarov-Perez would likely be the next in line for the title shot. Askarov called for the title shot after Saturday but he will need to beat Perez first in order to get that.

With the addition of Askar Askarov vs. Alex Perez, UFC Vegas 33 is as follows:

Who do you think will win, Askar Askarov or Alex Perez?