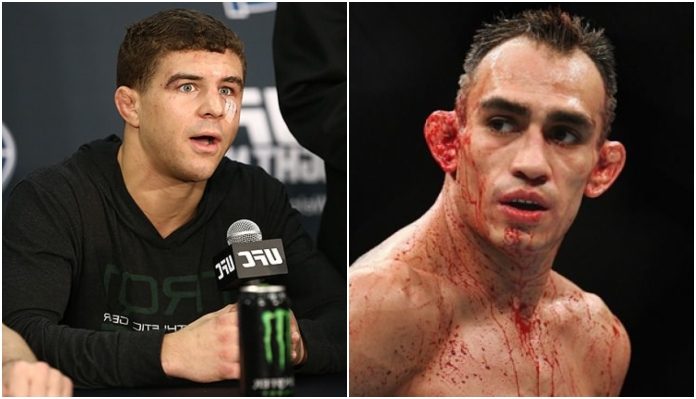 The lightweight division has consistently been one of MMA’s deepest and best for several years now. However, more recently there has been an influx of different storylines that have kept tying things up among the very top of the food chain.

Currently, the undisputed champion Khabib Nurmagomedov is suspended due to his post-fight actions at UFC 229 after he defended his title against Conor McGregor.

Also on the outside looking in is ‘Raging’ Al Iaquinta who was hoping to set something up with Poirier. Now that that option is off the table, Iaquinta is setting his sights on Ferguson.

“It’s gotta be Ferguson, that’s the fight it’s gotta be,” Iaquinta told Submission Radio. “There’s no one else. I think that’s what it should be. I doubt he’ll take the fight. I don’t know what his deal is. That guy, I have no idea.

“This is the most thinking I’ve done. Since I heard about the Dustin, Max fight getting made I sent out a few text messages to the matchmakers and said, ‘what are we doing?’ I need like a plan, you know, when you want me to fight, where you want me to fight, kind of like structure the next couple of weeks and months of my life. Because if you’re gonna come to me with like four weeks left and asking me to take a fight, that’s not the way it’s really done. And it started to seem like that’s the way it’s becoming. They’re scrambling for fights, they need fights, fights are falling off, and they have a million cards lined up. Every interim champion is now not an interim champion, they’re fighting above a weight class.

“You know, if you’re a champion, the 135 is now gonna be an interim champion at 145, the 145 champion’s gonna be an interim champion at 155,” Iaquinta continued. “So, everyone’s got a real belt, and an interim belt is just like… I don’t know. I think they need some help over there to get back to the old [way]. Obviously, you got to keep progressing, but it’s getting out of control. Now the belts don’t mean anything. The old UFC belt meant something. So, maybe that’s why they created this new belt that just doesn’t mean anything.”

Is Ferguson vs Iaquinta the fight to make?