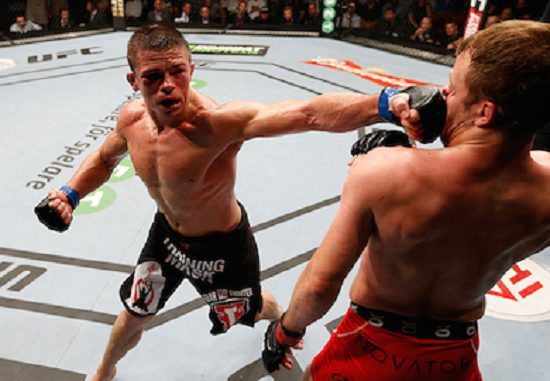 Round one begins and Story opens with a big leg kick. Saffiedine with a body kick but Story catches it and smacks him with a leg kick. Rick presses Tarec up against the fence. He lands a good shot to the body. Tarec replies with a high kick that lands. Story eats it and presses forward. Rick gets inside and shoots in for single leg. It’s not there so he presses Saffiedine up against the fence and begins working some short knees. Story with some good shots to the body. Tarec fires back with some short punches up top. Story and Saffiedine would trade shots right until the horn, with Tarec throwing a late kick.

Round two begins and Rick Story presses forward wildly with punches. Tarec catches him with another head kick. Once again Story in not shaken from the kick. Story throws a kick and slips. Saffiedine jumps on top but its short-lived as Story pops back up. The fighters break and Saffiedine goes upstairs with a high kick that is blocked. He lands a leg kick. Good left hand from Story. Tarec shoots in for a takedown. It is not there. Story turns Tarec around and presses him against the fence. The fighters break. Saffiedine lands a knee as Story comes in with shots to his body. The fighters work from the clinch position against the cage. Nice body shots from Story. He is putting relentless pressure on Saffiedine. Tarec is finally able to break free. He lands a head kick to start. Surprisingly he engages Story in the clinch. They move back to fighting against the cage. Nice knees inside from Tarec to end round two.

Round three begins and Story comes forward with a left hand followed by a leg kick. Nice inside leg kick by Saffiedine. The fighters exchange body kicks. Story comes inside and lands a flurry of shots to the body of Saffiedine. Tarec is able to break free and lands a left hand. Big kick just misses for Tarec. Story replies with a stiff left hand. Saffiedine lands a left hand of his own. They clinch. Story begins working shots to the body. Saffiedine lands a big elbow. Story with constant pressure. He is dictating the pace at the moment. Saffiedine is breathing heavy now. Tarec with a low kick and then a high kick that lands. Story should be rocked but he’s not. He comes forward with shots. Rick gets a hold of Saffiedine and presses him up against the fence. Tarec breaks free but eats a kick to the body. Nice counter right hand from Saffiedine. Story shoots in for a takedown. It’s not there so he delivers some knees to finish off the final round.