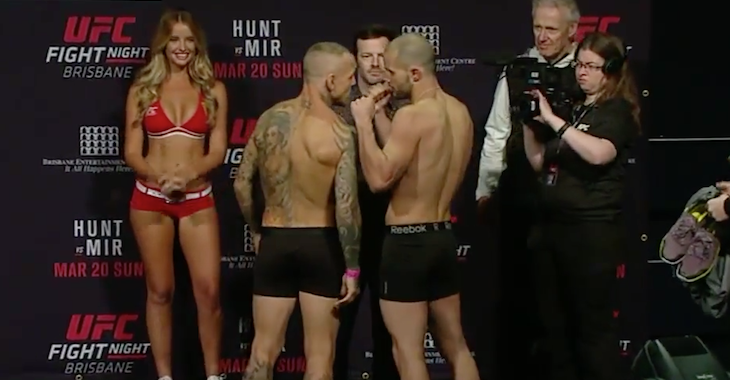 Round one begins and Larpise misses with a head kick. Good leg kick scores for Chad and Ross fires back with a good kick to the body. Another solid inside leg kick from Laprise. Pearson responds with a jab. Nice leg kick lands for Ross. Chad fires back with a body kick. Laprise with a high kick but Ross blocks it. Good lefts from both men. Ross with a solid leg kick. High kick misses from Pearson but he comes back and lands a good leg kick. Nice jab from Laprise. Pearson lands a leaping left hook. Good body kick from Chad. The fighters trade leg kicks. Laprise with a nice combo. Good kick from Ross. Laprise lands a good kick to end round one.

Round two begins and Ross opens with an inside leg kick. Nice quick jab from Chad. Ross with a high kick that misses. Pearson misses with a left hand. Heavy leg kick from Ross. Laprise’s leg is glowing red. Another good leg kick from Ross and then another. Pearson with a jab. Laprise responds with a counter left hand. Ross with a kick to the body and then a right hand. Nice kicks score for Chad. Good shots from both fighters. Big left hook and then some leg kicks by Ross. Spinning back kick returned by Chad. Another good left hook lands for Ross. Pearson with a leg kick. Chad with a jab. Another great left from Pearson. Good body kick scores for Chad to end round two.

Round three begins and Chad lands a left hand. Good jab from Laprise. Ross is walking him down and lands a leg kick and then a punch to the body. Nice left jab by Ross lands. Chad responds with a good leg kick. Pearson with a good right hand. He follows that up with a solid jab. Laprise is moving well but it is Pearson putting on the pressure. Nice left jab and then a body kick from Ross. Laprise fires back with a kick of his own. Ross with another good leg kick. Good double jab from Chad. Ross just misses with a big right hand. Nice combination from Chad. Ross with a nice left hand. The fighters trade kicks. Ross’s right eye is busted up. High kick scores for Chad. Nice jab from Laprise who moves away. Another big leg kick from Ross. God jab from Chad. And another. Big shots from Pearson lands. The fighters trade some big strikes to end round three.