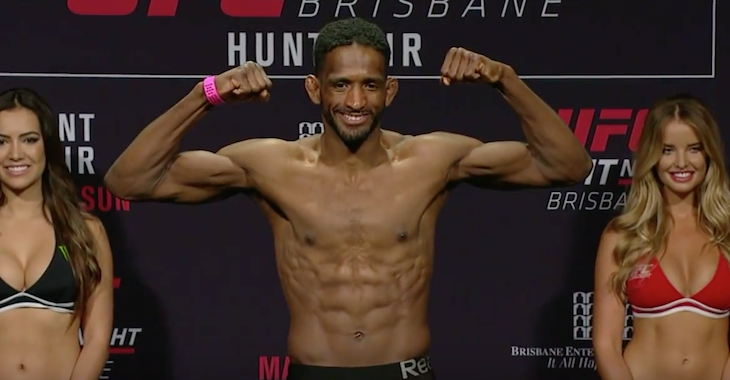 Round one begins and Lombard presses forward and lands a couple leg kicks. Big uppercut from Hector. Magny is hurt. Huge shots from the top by Hector. He has Neil flattened out and is landing some monster shots. Magny is trying to get up but Hector is relentless. Neil gets to his feet but is sent right back down. Lombard is working from side control. Magny scrambles and gets back to his feet. Neil dives in for a takedown but Lombard sprawls and gains top control. The fighters return to their feet and Magny lands a leg kick. Good left jab from Magny. Neil lands a good combo to finish up round one.

Round two begins and Magny opens with a front kick. Good left from Lombard but Neil responds with a left of his own. Good shots from both men. Nice knee from the clinch by Magny. Neil with a big right hand. Good jabs from Magny who is finding his range. Huge left hand from Lombard drops Magny. Hector follows him to the floor and begins working from the guard. Hector drops back for a leg lock and misses. Neil is now on top. Bad move by Hector. Magny transitions and throws up a triangle choke. Lombard is in trouble here. Hector escapes but Magny takes the mount. Big shots from Neil. Hector is flattened out. More shots from the top by Neil. He is battering Lombard here. Wow. The referee let it go and Hector escapes to round three. Unbelievable.

Round three begins and Magny opens with two huge shots. Lombard is still in big trouble. Neil shoots in and gets the takedown. He immediately moves to mount. Hector is bleeding. He throws up a triangle and finishes Lombard with strikes.

Neil Magny defeats Hector Lombard via TKO at 0:46 of round three