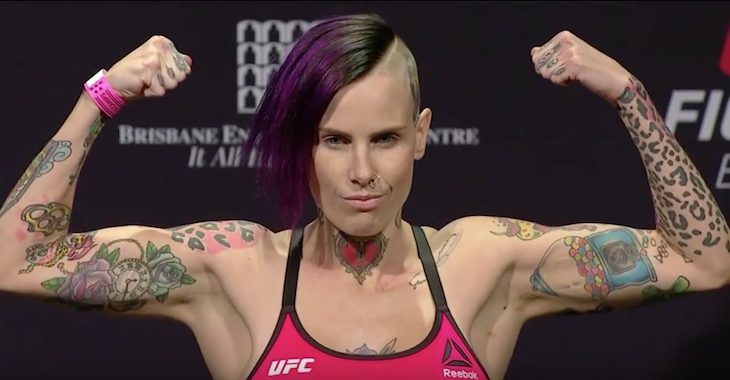 Bec Rawlings was able to find her range early on in round one. She frequently landed her left hand on Ham and was also able to score with some huge right hands in the opening five minutes. Seo Hee Ham did land a couple decent leg kicks in round one, but the bigger and better shots definitely came from the hands and feet of Bec Rawlings.

Round two begins and Bec opens up with a big left hand. Ham respond with a push kick and a jab. Another push kick scores for Ham. Rawlings circles and lands a nice combo. Seo responds with a good shot of her own. Bec is utilizing her reach well. Another push kick scores for Ham. Double jab scores for Seo and then a body kick. Rawlings catches a kick and takes Ham down. Good shots from the top by Bec who is working in full guard. Ham scambles but Rawlings takes her back. She is searching for a rear-naked choke but Ham is defending well. Seo scramles, Bec goes for the arm bar but it is not there. Ham winds up on top. The women are back on their feet. Ham with a kick and another. Good combination scores for Ham. Rawlings looks a bit tired. Ham pushes her against the fence. Good knee from Ham. She follows up with another push kick. Ham with a punch and another kick to end round two. Close round.

Round three begins and Ham gets it going with a good combination. She is landing her push kick at will. Rawlings shoots in for a takedown but winds up in a triangle choke. Rawlings is defending well but Ham is going for it. Rawlings shakes free and gets back to her feet. Bec is exhausted. She is taking deep breaths. Hm presses her up against the cage. Bec reverses the position and tries for a single-leg. Seo is not having it. Good knee from Bec. Ham needs to get off the fence. She finally does and the two ladies exchange strikes to end round three.