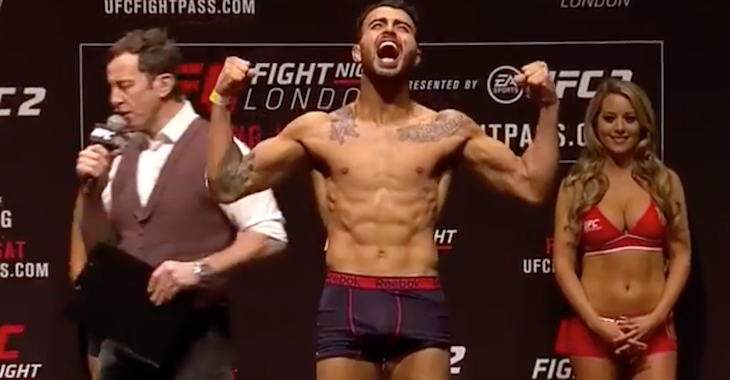 Amirkhani with a quick takedown to start the fight and he quickly moves to side control. Good hammer fists from the top by Amirkhani. Makwan is very controlling in the top position. Wilkinson looks for a key-lock submission but bails on it after Amirkhani lands a few more solid shots. Wilkinson tries to scramble but Makwan keeps him at bay. Round one comes to an end after some decent ground strikes from Makwan.

Wilkinson was able to sink in a deep guillotine choke in round two but Amirkhani was able to scramble, escape and end up in top position. Makwan quickly utilized the momentum to move to the full mount position. Wilkinson with some good defense and ends up getting back to full guard before the horn sounds to end round two.

Round three begins and Amirkhani opens with a leaping jab followed by a takedown attempt. He doesn’t get it at first, but keeps working and ends up getting Wilkinson back to the floor. Amirkhani quickly to side control and ends up dropping a couple of good right hands. Wilkinson scrambles and ends up on top. He begins landing some solid ground and pound on Amirkhani. Makwan is able to transition and take top position but it is short-lived as Wilkinson sweeps him and winds up in half-guard. Good elbows from the top by Wilkinson. More good shots are finding a home for Wilkinson. Mike dives for a leg lock but it’s not there. Amirkhani scrambles and winds up in the full mount position. A couple of good shots from Makwan before the horn sounds to end round three.