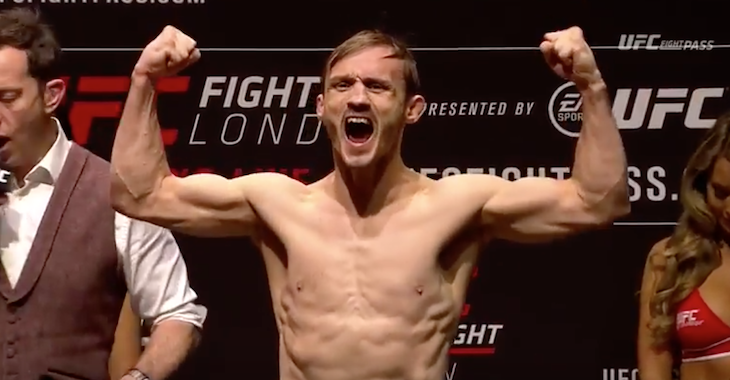 The UFC Fight Night 84 main card kicked off with a bantamweight bout between Brad Pickett (25-11 MMA) and Francisco Rivera (11-6 MMA).

Round one begins and Pickett opens with a leg kick that misses the mark. Good left hand lands for Rivera. Nice inside leg kick scores for Rivera. Good punches land for both men. Pickett with a solid leg kick and then a shot to the body of Rivera. Francisco responds with a good leg kick of his own. Pickett moving forward but he eats a leg kick and then an uppercut from Rivera. Nice right hand and then a head kick scores for Rivera. Francisco with a clean right that drops Pickett. Brad quickly gets back to his feet. Another nice punch, this time a hook, lands for Rivera. Spinning back kick attempt from Pickett partially connects. Nice left hook from Rivera drops Pickett. Brad hops up and starts throwing bombs. Both men with huge shots. Pickett with a takedown attempt. It’s stuffed. Round one comes to an end.

Round two begins and Rivera misses with a big left. He connects with a right hand though. Pickett returns fire with a leg kick. Rivera replies with a chopping kick of his own. Good punches from both men. Nice leaping hook scores for Brad. Rivera with a solid straight right. Another leg kick from Pickett. Rivera unloads with a big right but misses. Pickett ducks under and scores a takedown. Nice scramble from half guard by Rivera gets him back to his feet. Francisco immediately with a nice right hand and then a leg kick. Nice front kick scores for Rivera. Pickett misses with a leaping left hook attempt. He follows that up with some jabs but nothing is landing. Rivera is looking for the ‘homerun’ shot here. Francisco with a nice level change and scores a takedown. Pickett is back up but eats a right hand. Brad fires back with a left hook to the body but strikes Rivera in the groin. The referee steps in to put a break in the action. We restart and Rivera and Pickett trade huge shots to end round two.

Round three begins and Pickett is moving forward with punches. He dives in for a takedown but is stuffed by Rivera. They begin working against the fence. Brad is landing knees on Francisco. Rivera with a guillotine attempt but Pickett uses the choke to score a takedown and winds up in side control. Rivera is hanging on to the choke but it’s not there. He finally gives it up. Two and a half minutes left. The referee steps in and stands the fighters up. Pickett with two decent leg kicks. Rivera returns fire with two nice right hands. Francisco shoots in for a takedown and gets it. Pickett scrambles and gets back to his feet. Nice right hand from Rivera but Pickett just eats it moves forward and scores a slam takedown. Brad is in side control and is landing elbows. Round three comes to an end.

This will be a tough one to call for the judges. How did you score the fight?