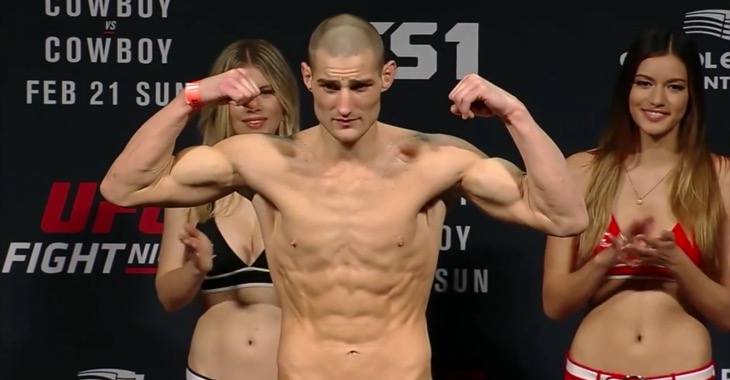 A welterweight bout between Alex Garcia (13-3 MMA) and Sean Strickland (17-1 MMA) served as the featured bout of the ‘UFC Fight Night 83’ prelims in Pittsburgh.

Round one begins and Strickland opens up with a front kick. Garcia dives in for a takedown and gets it but Sean is able to scramble and get back to his feet. Strickland has Garcia pressed up against the fence and lands some good strikes before throwing him to the canvas. Good up-kick from the bottom lands for Garcia. Sean dives in to his guard and lands a good right hand. Big shots from the top by Strickland and he moves to half guard. Nice elbows from the top by Sean. He follows up with some shots to the body of Garcia. More elbows from Strickland and Garcia is bleeding from his mouth. Sean postures up and lands some huge shots. Garcia scrambles and lands a takedown on Strickland. Alex with a couple of shots from top position. Good defense being shown here by Sean. Round one comes to an end.

Round two begins and Sean again opens up with some kicks. Good right hand lands for Garcia. He follows that up with a stiff jab. Strickland trying to work his jab to keep Garcia at range. Big left hand lands for Garcia. Sean replies with a leg kick. Strickland throwing jabs but Garcia is covering up well. Another good overhand left scores for Alex. Strickland answers with a stiff jab. Nice leg kick by Strickland. He follows that up with a front kick. Garcia charges forward with strikes but none land. More kicks from Sean but Garcia shoots in and scores a takedown. 30 seconds left in round two. Good defense from guard by Strickland. Garcia is struggling to get off punches. Round two comes to an end.

Round three begins and both fighters are tentative while setting up their strikes. Garcia shoots in for a takedown and gets it one minute in to the final round. Strickland is able to scramble free and get back to his feet. Good jab from Sean but Alex comes back with an overhand left. More jabs from Strickland score. Garcia with a good jab and then shoots in for a takedown. He doesn’t get it as Sean is able to shake him off. Good jab from Strickland and another. Garcia miss with a right hand. He throws another leaping left that just misses. Alex shoots for another takedown but it is stuffed. Good jab from Sean wobbles Garcia. Strickland rushes forward with strikes. He’s landing big shots and lots of them. A huge right stops Garcia! It’s over!

Sean Strickland defeats Alex Garcia via TKO at 4:25 of round 3