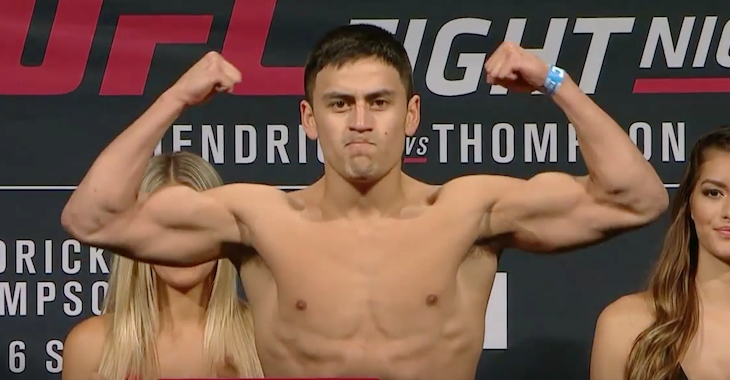 A featherweight bout between Noad Lahat (9-2 MMA) and Diego Rivas (7-0 MMA) kicked off the UFC Fight Night 82 prelims on FS1.

Round one begins and Rivas promptly pokes Lahat in the eye and action is stopped. The doctor comes in to examine the injury. Lahat says he is good to go and the fight continues. Good leg kick from Lahat, who pushes forward and scores a takedown on Rivas. He moves to mount and has a tight guillotine choke locked in. Rivas is holding on but this doesn’t look good. Rivas bucks and shakes Lahat back in to half guard. Lahat landing short elbows from the top now. Rivas attempts a triangle but gives up his back. Lahat is searching for a rear-naked choke but Rivas is defending well. Lahat now locks in a head-arm choke and it’s deep. Once again Rivas is able to defend the submission attempt. Rivas is fighting back hard and has worked his was to his feet. He lifts up Lahat and slams him down. Lahat scrambles and winds up on top of Rivas. Good shots from the top to end round 1 for Lahat.

Round two begins and Rivas starts things off with a body kick. He follows up with a huge flying knee that crushes Lahat! It is all over, Lahat is out!