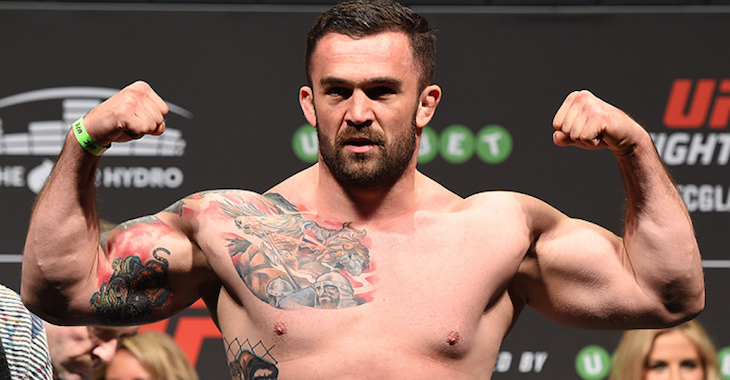 Round one begins and both men waste no time getting down to business as they exchange bombs. Alexey ducks under and grabs a hold of Daniel and drags him to the ground. Oleinik moves in to half guard and then quickly transitions in to mount. Alexey is searching for submissions but Daniel is defending well. Eventually Alexey would take the back of his opponent but could not lock in a choke before round one comes to an end.

Alexey came out and start round two very aggressively. Daniel used that forward pressure to get Alexey up against the fence where he landed some big shots. Alexey dives for a leg and uses the submission attempt to get Daniel on to his back. Oleinik quickly moves to side control where he works some short strikes. Daniel is able to get back to his feet and land a viscous left hook as well as a brutal elbow that busted Oleinik open. Round two comes to an end.

Round three begins and Alexey pushes Daniel against the fence in an attempt to score a takedown. Omielanczuk is able to fend off the attempt and then score a takedown of his own. Daniel with some short shots from the top. The referee is telling him to stay busy. He lands some shots to the body of Alexey. After a few seconds the referee steps in and stands them up. Nice right hand lands for Daniel. Alexey is busted up but still he presses Omielanczuk against the fence and begins working for a takedown. Oleinik is finally able to get the fight to the ground and quickly takes the back of Daniel. He is searching for a submission attempt. Daniel scrambles and winds up in top position. What a tough break for Alexey. Omielanczuk fails to stay busy so the referee stands them back up. Alexey comes forward with punches but gets taken down by Omielanczuk. Round three comes to an end.