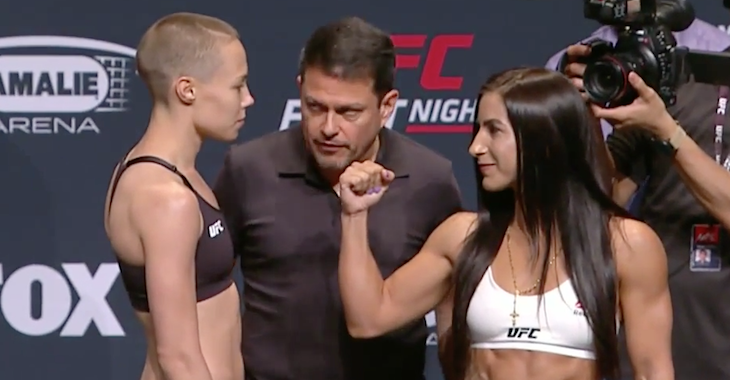 A key women’s strawweight bout between Rose Namajunas (5-2 MMA) and Tecia Torres (7-1 MMA) served as the co-main event for tonight’s UFC on FOX 19 card in Tampa.

Round one begins and Rose lands a short left. Front kick attempt misses for Namajunas but she connects with a follow-up leg kick. Nice kick lands for Torres. Rose presses forward and lands a couple of shots. Good kick to the body by Rose but Tecia catches it and fires back with some decent shots. Namajunas with a leg kick. Nice leg kick and then a right hand by Torres. Namajunas works her jab. Tecia presses forward with punches but Rose avoids any damage. Tecia lands a nice left hook and Namajunas was wobbled. Tecia presses Rose against the fence. Namajunas scores a trip and winds up on top. Nice shot from Rose lands flush. Tecia is scrambling. The horn sounds to end round one.

Round three begins and Tecia comes forward with head kicks. She lands a side kick to the body of Rose. Nice leg kick from Torres and then a good side kick. Big right hand lands for Rose. Tecia lands a front kick to the leg of Namajunas. Another nice leg kick by Torres. Nice left hook by Rose but Tecia responds with yet another leg kick. Torres with more damaging kicks to Rose’s lead leg. Namajunas lands a good counter left. Both women throw punches but nothing connects flush. Good right hand from Rose. Torres responds with a nice combo. A high kick and then a jab that misses from Rose. Namajunas misses with a front kick. Tecia with another right leg kick. Rose with a big takedown. She begins working from guard. Round three comes to an end. This fight is going to the judges scorecards.