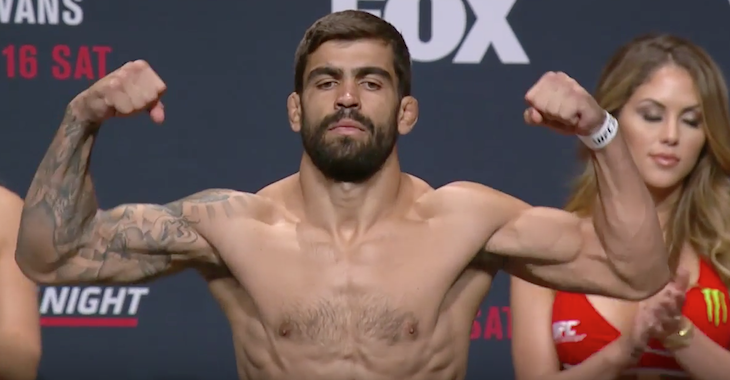 Round one begins and Akhmedov opens with a jab that misses. Dos Santos and Akhmedov exchange leg kicks. Big right hand just misses for dos Santos. Akhmedov lands a good shot. Elizeu replies with a leg kick. Akhmedov shoots in and lands a takedown. Dos Santos with a heel hook attempt and uses it to take top control. The Brazilian moves to halfguard and Akhmedov locks up a kimura. It is tight but dos Santos is able to roll and escape. Back on their feet and dos Santos eats a solid jab. He responds with a heavy leg kick on the lead leg of the Russian fighter. Round one comes to an end.

Round two begins and dos Santos and Akhmedov exchange leg kicks. Big shots from dos Santos drops Akhmedov. The Russian jumps back up and lands a takedown. Big shots from Akhmedov but dos Santos fights his way back to his feet. Another huge leg kick lands for dos Santos. Nice left hand from Akhmedov. These guys are trading now. The fighters clinch and dos Santos lands a knee. Akhmedov shoots in and lands a good takedown. Dos Santos with a heel hook attempt and once again scrambles to wind up in top position. Akhmedov fights his way back to his feet. Spinning back fist attempt from the Russian fighter. Good kicks to the body from dos Santos. The Brazilian shoots in for a single leg but is unable to complete the takedown. Round two comes to an end.

dos Santos defeats Omari Akhmedovat via TKO at 3:03 of round three