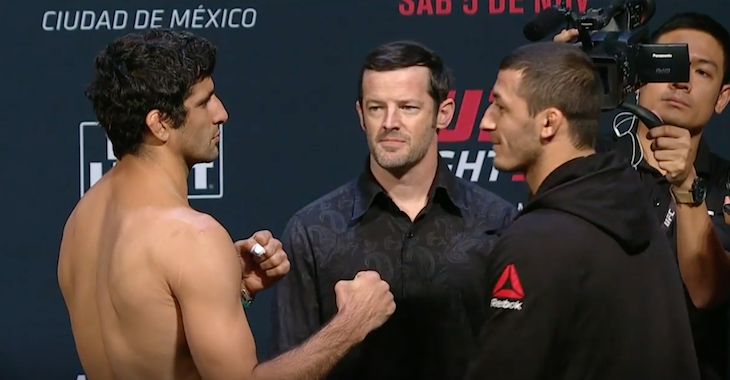 Round one begins and Dariush throws a high kick to start. He comes forward and lands a jab. Beneil misses with a head kick but lands low kick. Beneil presses Magomedov against the cage. He lands a knee inside. Dariush attempts a takedown but gets swept and Magomedov takes his back briefly. A couple of shots landed from Rashid and Beneil breaks free. A low blow connects on Beneil and we have a brief break. Upon the restart Dariush lands a low kick. He throws a jab and follows that up with a kick to the body. A nice superman punch lands for Beneil and then a kick to the body. Magomedov gets a hold of Beneil and presses him up against the cage. Rashid lands a trip takedown and winds up in half guard as round one comes to an end.

Round two begins and Dariush presses forward and misses with a high kick. A nice combo scores for Beneil. He follows that up with a hard leg kick. More pressure from Dariush who land an overhand left. Rashid with a good counter. The fighters exchange leg kicks. Beneil presses forward and lands a nice left. The fighters clinch in the middle of the octagon and Dariush lands some good knees inside. Rashid responds with some uppercuts. More knees from Dariush. The fighters are battling for position along the cage. One minute remains. The fighters jockey for position until the horn sounds to end round two.

Round three begins Beneil lands a leg kick. Rashid responds with a kick to the body. The fighters clinch up and begin exchanging knees. After a minute in the position the fighters break and Beneil throws a body kick. They once again engage I the clinch and Dariush begins landing some solid knees. Beneil is grinding on Rashid here. Lots of knees. The referee steps in and breaks them up. The decision doesn’t last long as the fighters reengage in the clinch almost immediately. After some small exchanges the fighters break and begin trading shots until the horn sounds to end round three.