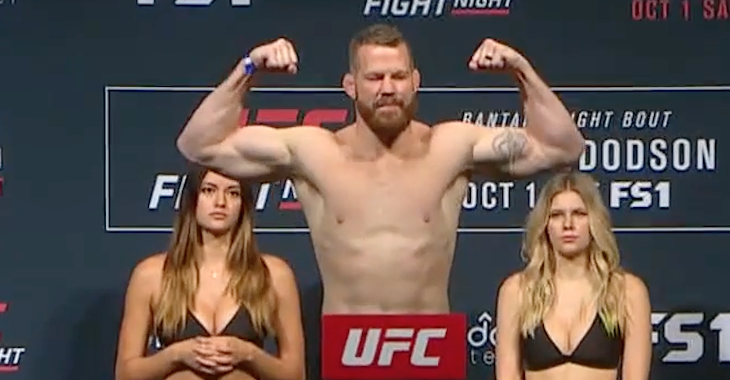 With that said, four “Performance of the night” awards were handed out at last night’s post fight press conference.

Performance of the night bonus – Brandon Moreno picked up a bonus for his shocking first-round submission upset of Louis Smolka. Moreno was the biggest underdog on the card but that did not stop him from sinking in a nasty guillotine choke on his Hawaiian opponent.

Performance of the night bonus – Nate Marquardt picked up a bonus for his head kick knockout victory over Tamdan McCrory in the featured bout of the UFC Fight Pass prelims. Nate rocked McCrory with a right hand and then promptly followed up with the fight-ending head kick.

Performance of the night bonus – Luis Henrique da Silva picked up a bonus for his submission victory over UFC newcomer Joachim Christensen. After getting rocked early, da Silva fought back and ended the contest with an armbar submission late in the second round.

Performance of the night bonus – Curtis Blaydes scored a bonus for his TKO victory over Cody East. The Chicago native was able to rain down some thunderous elbows on East which prompted the referee to step in and stop the contest in the second round.