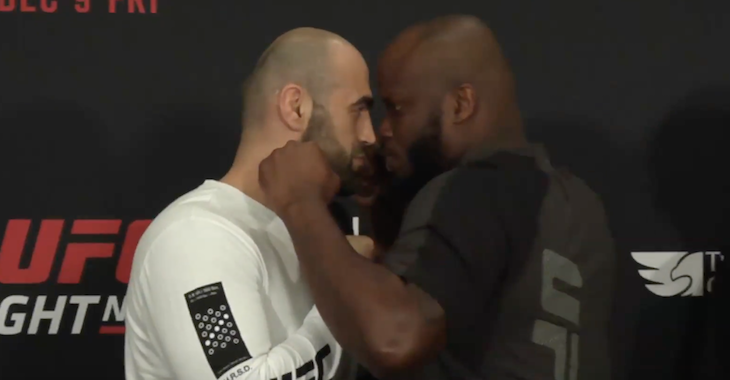 Round one begins and Lewis attempts a high kick but Abdurakhimov catches it and takes Derrick to the ground. Shamil moves to side control and begins working on a keylock submission attempt. He switches for a kimura lock. Lewis scrambles and stands back up. Abdurakhimov has a body lock and pushes Lewis against the cage. The fighters exchange knees. Shamil with some short shots from the clinch. Lewis switches the position briefly but Shamil adjusts and presses him back up against the fence. The fighters break and Lewis misses with a front kick. Abdurakhimov circles away and lands a leg kick. Lewis presses forward and grabs a hold of Shamil. Abdurakhimov uses the clinch position to push Lewis back up against the fence. Derrick escapes and circles out. He lands a big leg kick but Shamil catches the strike and scores a takedown. He begins working from full guard. He moves to mount and lands a couple of strikes before the horn sounds to end round one.

Round two begins and Lewis surprisingly looks to clinch. He presses Abdurakhimov against the cage and lands some knees inside. Shamil switches the position and Lewis seems to be complaining about an eye poke. The referee did not see it if it happened. Lewis breaks free but Shamil chases after him and grabs a hold of Derrick forcing the clinch. Some knees and short shots inside from Shamil. Lewis breaks free. He throws a leg kick but Shamil catches it and scores another takedown. Abdurakhimov begins working from full guard and lands some short shots. Lewis scrambles and gets a hold of Shamil’s leg. He looks for a heel hook. Lewis transitions to a knee bar and uses the submission attempt to get back to his feet. He lands an uppercut on Shamil, but Abdurakhimov is able to dive in and score another takedown. He lands some short shots from the top to close out round two.

Round three begins and it could easily be 2-0 on the judges scorecards for Abdurakhimov. Lewis presses forward and throws a body kick. Once again Shamil catches it but is unable to score the takedown this time around. Lewis lands a nice uppercut. He charges forward with a right hand that misses but lands a follow up uppercut. Abdurakhimov circles out. He comes forward with a jab and then an elbow. Neither strike seems to bother Lewis. Derrick presses forward and grabs a hold of Shamil. He attempts a takedown but Shamil is not having it. The fighters break and Lewis misses with a wild right. Abdurakhimov ducks under the punch and scores an easy takedown. He moves to side control and begins looking for a submission attempt. Lewis scrambles and gets back to full guard. Lewis with some elbows from the bottom. Not a lot of action here and the referee steps in to stand the fighters back up. Lewis charges forward with a wild left. He follows that up with a right haymaker that misses the mark. Abdurakhimov lands a leg kick and then another. The fighters trade right hands to end round three.

Round four begins and Lewis misses with a wild right hand. Lewis throws a high kick and Abdurakhimov catches it and takes him down. Derrick pops right back to his feet. Shamil presses him against the cage. Lewis switches the position and breaks free. Derrick lands a big uppercut. Once again the fighters clinch. Shamil presses Lewis against the cage. He works a knee and then an elbow on the break. Lewis presses forward and lands a knee to the body of Shamil. Abdurakhimov returns fire with a kick. Shamil charges forward with a combination. Lewis looks for an uppercut and then clinches up. Lewis scores a much needed takedown and begins raining down some big ground and pound. Lewis moves to full mount. He tags Shamil with a right hand. And another. This one is over.