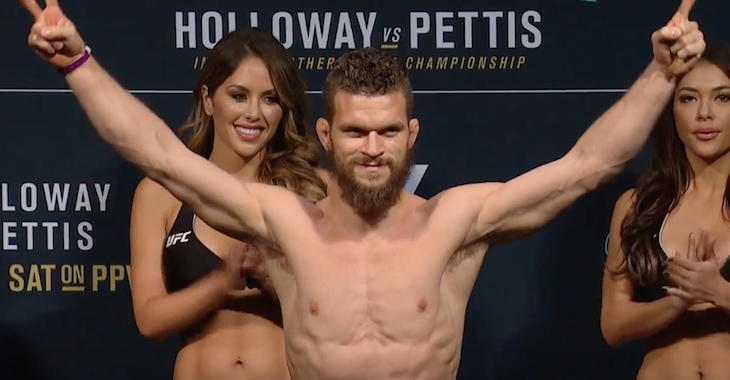 Round one begins and Ortiz comes out quickly with forward pressure. The fighters clinch and Makovsky lands a knee. Ortiz presses him against the fence. After a brief grappling exchange they break. Ortiz circles and then dives in for a takedown. He gets it. He quickly transitions to the back of Makovsky. Zach is able to scramble and almost gets the back of Ortiz. Dustin is able to defend the attempted transition and winds up back in full guard. Zach uses the cage to wall-walk and get back to his feet. Ortiz still has him pressed against the cage. He lands some knees from the clinch. Makovsky looks for a trip but cannot get it. The fighters break and Zach quickly shoots in for takedown. He gets it and tries to take the back of Dustin. He is to high and Ortiz slips out and winds up on top. Round one comes to an end.

Round two begins and Makovsky lands a spinning back kick to start. He shoots in and scores a takedown. It is short lived as Ortiz bounces right back to his feet. The fighters exchange punches. They clinch up and Ortiz presses Zach against the cage. Dustin drops down and is able to score a takedown. Zach bounces right back to his feet but Ortiz still has a hold of him. Makovsky is looking for a submission. The kimura attempt fails and Ortiz winds up on top. Makovsky tries to secure a knee bar but Ortiz rolls out of it. Dustin takes the back of Zach with 90-seconds to go. He begins working for a rear-naked choke. Zach scrambles and gets back to his feet. Dustin works some short body shots against the fence. He scores another takedown and is able to once again get the back of Zach. Round two comes to an end.

Round three begins and Makovsky lands a leg kick. Ortiz scores with one of his own. Zach dives in for a takedown but Ortiz locks in a guillotine choke. He has it tight but Makovsky doesn’t appear to be struggling. He breaks free and winds up in full guard. Makovsky with some short shots but Dustin scrambles and gets back to his feet. He immediately shoots in for a takedown but Zach defends. Makovsky and Ortiz jockey for position. Dustin winds up on top and moves to full mount. Makovsky scrambles and is able to get back to his feet. Zach with some good knees inside. He presses Ortiz against the fence and the engage in the clinch. The fighters break and Zach shoots in and scores another good takedown. He tries to take the back of Ortiz. Round three comes to an end.