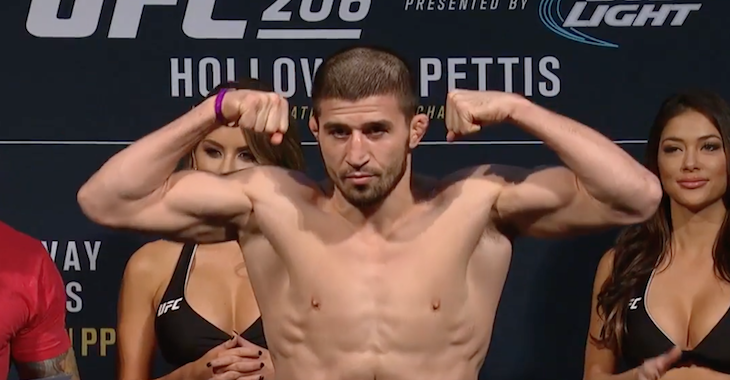 Round one begins and Khabilov misses with a right hand and then a high kick. Saggo misses with a front kick but then connects with one to the body. Khabilov charges forward and connects with a left hook and then another. Saggo with a front kick and then a high kick that connects. Khabilov shoots in and scores a big slam takedown. He begins working some short shots from the full guard position. Saggo is eventually able to scramble free after utilizing his rubber guard as an effective defense.

Round two begins and Saggo presses forward and misses with a low kick. He connects with a follow up right hand and then a body shot. Another good low kick scores for Saggo. Khabilov presses forward with a combination. He lands a good inside leg kick. Saggo eats in and presses forward with a right. He connects with a nice kick to the body. Rustam with a low kick. Jason returns fire with a kick to the body. He lands another. Khabilov circles out but Jason is staying on him. Saggo misses with a high kick. He scores with a low kick. Rustam shoots in for a takedown and he gets it. Khabilov starts working from full guard in the center of the octagon. Saggo scrambles and gets back to his feet. He eats some big shots from Rustam for his efforts though. Saggo circles off the fence and then charges in for a takedown attempt. Khabilov sweeps him and winds up on top. Round two comes to an end.

Round three begins and Saggo and lands a low kick and then a combination. Khabilov fires back with a right hand. Jason continues his forward pressure and lands a kick to the body. Rustam circles away and then comes forward with a double jab. Jason lands a nice left hook. He presses forward and lands a body kick. Khabilov shoots in and scores another takedown. He begins working from the full guard of Saggo. Jason pulls rubber guard and attempts to lock up a shoulder. He gives up on the attempted submission and switches to an armbar which he cannot secure. Khabilov with a couple of short shots here. Saggo lock up a an arm and uses the hold to try and sweep Khabilov. It works, and Jason is back up. Khabilov immediately shoots in and scores another takedown however and then the horn sounds to end round three.