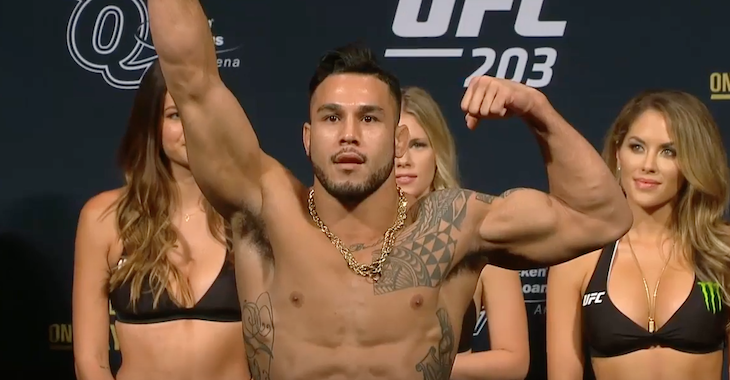 Round one begins and Tavares charges forward with punches and lands a nice leg kick. Magalhaes misses with a kick to the body. Brad lands a nice punch to the mid section of Caio. Tavares and Magalhaes exchange and Brad lands a nice left. Magalhaes shoots in for a single leg and presses Tavares against the fence. Brad is doing a good job of defending so far. He is able to break free and takes the center of the cage. Magalhaes circles and shoots back in for another takedown. He is unsuccessful with the attempt but uses the clinch to push Tavares back against the cage. Round one ends with Caio attempting a takedown.

Round two begins and Tavares misses with a head kick. Caio responds with a kick to the body of Brad. Tavares misses with a big left hand. He follows up with a nice kick to the body of Magalhaes. Tavares is pressing the action but Caio is circling to keep away from the Hawaiian’s big power punches. The fighters engage in the clinch. Tavares gets double underhooks and presses Caio against the fence. Magalhaes shakes him off and breaks free. Tavares misses with a right hand but lands a nice low kick. Another nice leg kick scores for the Hawaiian. Brad presses forward and lands a front kick. Caio swings and misses with a wild left hook. Magalhaes connects with a big leg kick. Tavares fires back with a nice right hand. Caio shoots in and tries to secure a takedown. Tavares is doing a good job of defending. Magalhaes is able to get Brad down but Tavares immediately pops back up to his feet. Round two comes to an end.

Round three begins and Tavares misses with a big right. Caio lands a nice leg kick. Brad is putting on a lot of pressure here. He misses with a wheel kick. Magalhaes comes forward and misses with a low kick. Tavares ducks under a punch and pushes Caio against the cage. The fighters start battling from the clinch. Caio switches the position and presses Brad against the fence. Tavares turns him around but exposes his neck. Magalhaes locks in a guillotine choke but Tavares is able to escape the submission hold. The fighters go back to battling against the cage. They break and Brad lands a nice left hand. He presses forward and lands a right hand followed by a nice flying knee. He is putting the heat on Magalhaes now. A nice kick lands for Tavares. Caio responds with a nice left hook. One minute remains and Tavares lands a big right hand. Both men are throwing bombs now. Caio charges forward with a combo. Tavares lands a knee and then a right hand to end round three.