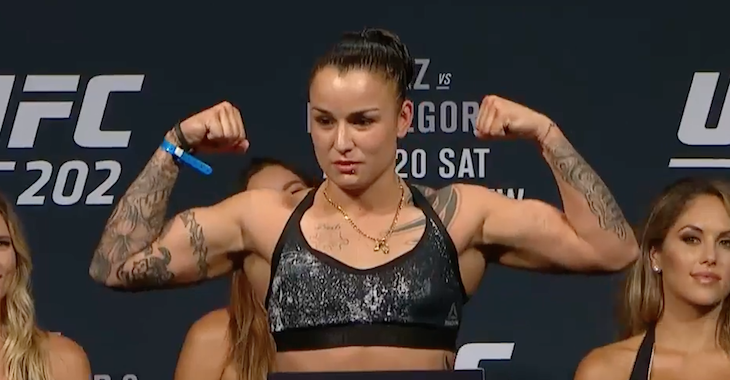 Round one begins and Pennington takes the center of the cage. Phillips leaps in with a jab that misses. She lands a short leg kick. Raquel lands a kick to the body. Phillips pumps her jab but it doesn’t land. She lands a nice leg kick. Phillips presses forward and pushes Pennington against the cage. She works some knees from the clinch and then lands a nice elbow. Both women are landing some good strikes from the clinch position. This is a grueling battle against the cage. The women finally break and Raquel fires a jab that misses. Phillips lands a jab of her own and then a leg kick. Raquel gets inside and lands a nice knee. She drops down and picks up Phillips and slams her. Elizabeth is able to wall-walk and get back to her feet. Raquel lands a late flurry to end round one.

Round two begins and Phillips lands a leg kick. Pennington presses forward and clinches up. She lands a nice knee inside and then another. Phillips switches the position and presses Raquel against the cage. Phillips ducks under for a takedown and gets it but Raquel has her neck. Pennington is trying to lock in the choke but is forced to let it go. Phillips is now working in side control. Raquel scrambles and gets back to her feet. She grabs a hold of Phillips neck and searches for a standing guillotine. Elizabeth is able to break free of the hold. Phillips presses Raquel against the cage. Pennington lands a nice knee inside. Phillips is searching for a double-leg takedown. Pennington defends and lands some short shots. She takes the back of Phillips while standing and is able to pick her up and slam her down to the canvas. Good shots from the top by Raquel to close out round two.

Round three begins and Pennington lands a leg kick to start. Phillips replies with a front kick to the body. Pennington circles and lands a nice jab. The fighters clinch and Raquel lands an early knee from the position. Pennington is searching for a double-leg takedown and gets it. Phillips tries to scramble back to her feet but ends up giving up her back. Pennington is on Phillips back with one hook in. Raquel works a couple of short shots. Pennington sinks in her second hook. This is a bad position for Phillips. Raquel begins working some strikes. Phillips scrambles but Pennington winds up in mount. Raquel looks for an arm-triangle but it back fires and Phillips winds up in top position. One minute remains in the fight. Raquel is able to scramble and get back to her feet. She presses Phillips against the cage. The horn sounds to end round 3.