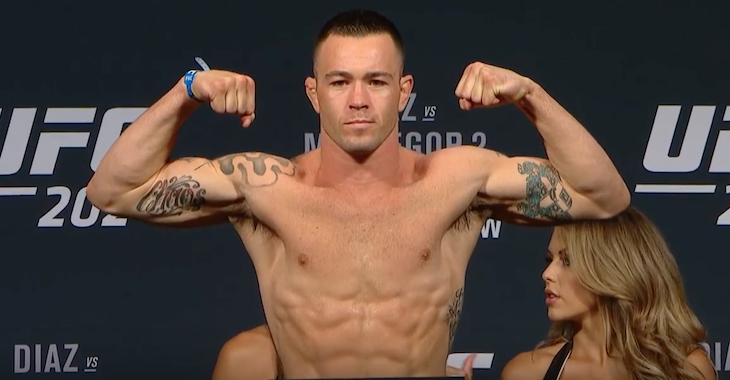 A welterweight scrap between Colby Covington and Max Griffin served as the second bout of tonight’s UFC 202 fight card in Las Vegas.

Round one begins and Covington misses with a high kick to start. Good kick from Colby. Both fighters land right hands. Covington with another kick to the body. Colby shoots in and lands a single leg takedown. He immediately moves to side control. Griffin scrambles and gets to half guard. Max is searching for a kimura and uses the attempted submission to get back to his feet. Colby presses Max against the cage and forces him back down. Covington moves to full mount. Griffin gets back to half guard but eats an elbow for his troubles. Colby moves to side control position. Max scrambles and gets back to half guard. Colby with a nice short elbow. He lands a big elbow over the top. Covington moves to mount and lands some big shots as round one comes to an end.

Round two begins and Covington misses with a high kick. Max lands a nice left. Colby shoots in but the takedown is not there. He lands a nice shot on Max and then shoots in and lands a takedown. Big shots from the top by Colby. Max gives up his back. Colby is landing some big shots from the back position. He begins looking for a choke. It is not there so he continues to pepper Max with punches. Covington moves to full mount and lands a big elbow that splits Max open. Griffin explodes but is unable to get back to his feet. Covington with some big left hands. He takes the back of Griffin. More heavy shots from Colby. Max is finally able to get back to his feet just as the horn sounds to end round two.

Round three begins and Covington once again opens things up with a high kick that misses. Max with a nice punch. He throws a leg kick but Colby uses the strike to earn a takedown. Covington immediately moves to the back of Griffin. Big shots from the top by Colby. He is battering Max here. The referee warns Max to fight back. More shots from Colby. The ref steps in and stops the fight.