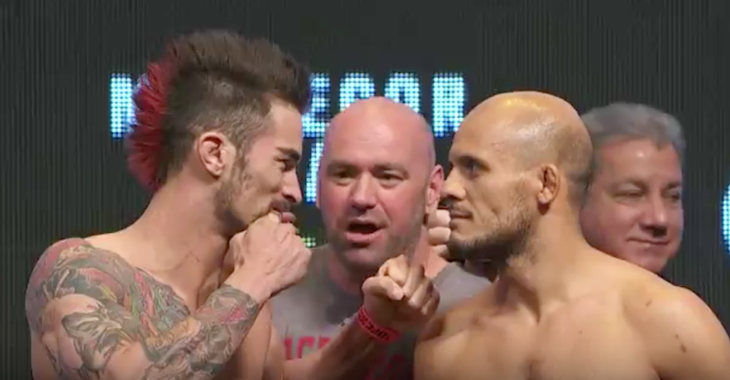 Round one begins and Thatch opens with a high kick. Some solid leg kicks score for Thatch. Siyar presses forward with punches. Thatch is landing kicks at will but Bahadurzada is eating them and moving forward. Good exchange. The fighters clinch up and exchange knees. Good elbow from Brandon on the break. Both men start swinging for the fences. Thatch ducks under and lands a takedown. Bahadurzada is able to sweep Thatch and ends up on top. Good shots from Bahadurzada. Thatch attempts a triangle submission but it is not there. A few more shots from the top by Siyar as round one comes to an end.

Round two begins and Thatch lands a front kick to the face of Siyar. Big left hand from Brandon hurts Bahadurzada. Siyar shoots in and scores a takedown. He begins working from full guard and lands a big shot from the top. Some more decent shots score for Siyar but Thatch is defending well. The referee steps in and stands them up. Good right hand from Brandon. Nice knees and uppercuts score from Bahadurzada. Siyar shoots in for a takedown and gets it. He begins working some good ground and pound from full guard. Thatch is attempting an armbar but it is not there. One minute to go in round two. Some more good shots from the top land for Siyar. Thatch is trying to get up but Bahadurzada is not having it. Round two comes to an end with Siyar in top position.

Round three begins and Thatch is pressing forward. Big right hand lands for Bahadurzada. Thatch goes down. Huge shots from the top by Siyar. Brandon looks exhausted. Big shots from full guard are landing for Siyar. Thatch is holding on hoping for a stand-up. Big body shots lands for Siyar. The referee steps in and stands them up. Thatch is pressing forward and Siyar lands a leg kick. Bahadurzada throws two punches and then shoots in and scores another takedown. Two minutes to go in the final round. Bahadurzada moves to half guard and he is now searching for a head and arm choke. It’s deep and Thatch is forced to tap.