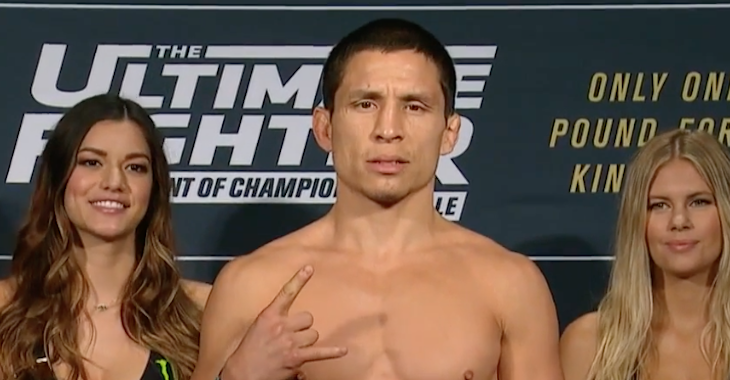 Round two begins and Cejudo charges forward with punches he connects with a knee inside. Joe responds with a good hook. Benavidez misses with a high kick and then another. Henry presses forward and lands a nice combination that ends in an uppercut. Henry with a good knee inside. He goes to the body with a jab. Joe fires back with a kick to the body. He goes low with a kick and then lands a nice hook upstairs on Cejudo. Henry fires back with a combination. He charges forward with a kick and then a hook. Another nice kick from Cejudo. Benavidez circles out but eats another kick to the body. Joe presses forward and misses with an attempted combination. Joe with a left hand. Cejudo lands a nice left hook. And then another. He goes to the body with a kick. Joe responds with a pair of body kicks of his own. The fighters exchange punches to end round two.

Round three begins and both mean lands punches early. Joe with a nice combination. Henry grabs a hold of him and briefly takes his back. They break and Cejudo lands a left hand. A nice leg kick scores for Henry. Cejudo and Benavidez exchange combos. Joe lands a knee and Henry replies with a right hand. They bang it out in the center of the octagon. Joe charges forward and lands a nice combination. Henry responds with a counter left. Joe with another nice combination. This is a war folks. Cejudo faints going for a takedown. He lands a nice kick to the body. Joe replies with a good uppercut. Both men with good shots. A left from Joe, a right from Henry. They stand and trade shots to end the fight.