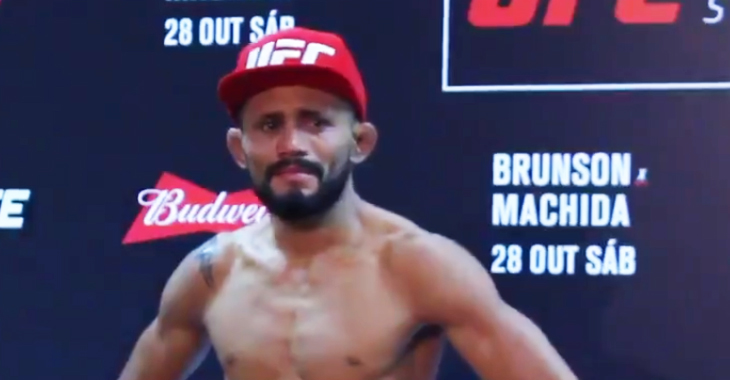 Round one begins and Figueiredo misses with a wild spinning back kick to start. Brooks circles and then comes forward. Figueiredo grabs a hold of him but Brooks is able to break free. More circling from Brooks. He shoots in but cannot secure a takedown. The fighters battle in the clinch and Figueiredo presses Brooks against the cage. Good knees from the Brazilian. Brooks switches the position and then shoots in for a takedown. He lifts up his opponent and slams him to the canvas. Brooks is working from full guard here. He postures up and lands a couple of left hands. Figueiredo attempts to scramble free and is able to get back up to his feet. He presses forward and lands a right hand. Brooks is circling a lot. Figueiredo is trying his best to cut him off. Brooks shoots in and scores another slam takedown. Brooks presses Figueiredo against the cage. He begins working some good shots. 30 seconds remain in the opening round. Good elbows now from Brooks. The horn sounds to end round one.

Round two begins and Figueiredo misses with an attempted high kick. The fighters clinch along the fence. Figueiredo attempts a takedown but it is not there. The fighters break and Brooks lands a kick. Figueiredo counters with a nice right hand. He lands a combination. Brooks shoots in for another takedown. He gets it but is trapped in a guillotine. Brooks breaks free and begins working from full guard. Figueiredo scrambles free and gets up to his feet. Brooks once again shoots in for a takedown, gets it, but winds up in a guillotine. It looks tight but Brooks somehow escapes. He begins working some elbows from the top position. Figueiredo scrambles and gives up his back. The referee stops the action and stands up the fighters after a “shorts grab” from Brooks. Figueiredo with a left hand. He works in another. Brooks is backing up now. Figueiredo shoots in a lands a takedown. Round two comes to and end.

Round three begins and Figueiredo pushes forward but is immediately taken down by Brooks. Figueiredo gets up and then drops down for a guillotine choke. Brooks escapes the submission attempt and we are back on the feet. Brooks lifts Figueiredo up and slams him down. The Brazilian immediately pops back up to his feet. Brooks lands a suplex. Figueiredo looks for a kimura from the bottom position but it is not there. Two and half minutes remain. Figueiredo gets back up and begins landing some hard shots. He needs to do something big here. He lands a nice hook. Another solid left hook from the Brazilian. Brooks circles off the fence. Figueiredo catches him with a hard kick to the body. Another hard left hand from Figueiredo but Brooks shoots in and lands a takedown. Round three comes to an end.