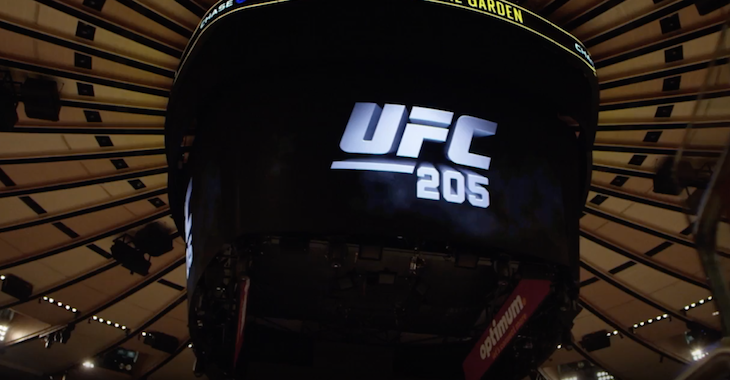 The biggest fight on the card, unsurprisingly, is its main event super-fight, which will see Eddie Alvarez defend his UFC lightweight title against reigning UFC featherweight champion Conor McGregor. Alvarez won the title in July by smashing the streaking Rafael Dos Anjos to a first-round TKO win. McGregor, meanwhile, won featherweight gold with a 13-second KO of Jose Aldo last December. The brash Irish superstar has spent his last two fights battling Nate Diaz at welterweight. If the Irishman is successful against Alvarez, he will become the first fighter ever to hold two UFC titles simultaneously.

The historic event has prompted the promotion to make some small changes to the gloves worn by fighters this Saturday night in New York.

The UFC released the following photo on Instagram of Conor McGregor trying on the new special edition UFC 205 gloves. Check it out:

Alvarez vs. McGregor is not the only title fight on the bill.

Woodley won the welterweight title by leveling Robbie Lawler with a first-round punch at UFC 201 in late July. Thompson earned his shot at Woodley’s new belt by extending his win-streak to a whopping seven with a June defeat of recent Bellator signee Rory MacDonald.

Jedrzejczyk, meanwhile, won the title UFC strawweight title back in early 2015, beating the brakes off the division’s inaugural champion Carla Esparza en route to a second round knockout. Since then, the undefeated Polish striker has successfully defended the throne against Jessica Penne, Valerie Letourneau, and Claudia Gadelha. Kowalkiewicz, another undefeated Polish fighter, has gone 3-0 in the UFC, most recently cementing her number-one-contender status with a decision triumph over the dangerous Rose Namajunas.

Below is the full UFC 205 fight card: