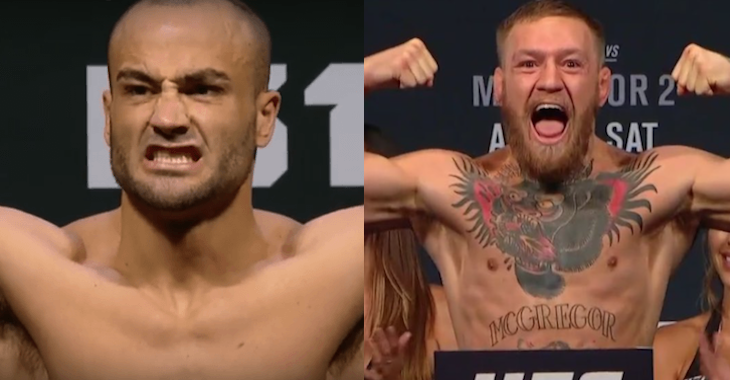 Monday evening, news surfaced that UFC featherweight champion Conor McGregor would be making the jump to lightweight to fight Eddie Alvarez for his UFC lightweight championship on November 12th at the UFC’s historic event at the Madison Square Garden.

The fight announcement took the MMA community by surprise after it was revealed earlier this month by UFC President Dana White that it would be Khabib Nurmagomedov, not Conor McGregor, who would be fighting Eddie Alvarez for the UFC lightweight title at UFC 205.

Nurmagomedov followed up White’s announcement by leaking two pictures of signed contracts, both for fights with Alvarez, one being for UFC 205, and the other being for UFC 206. With the MMA community waiting on Eddie Alvarez to sign on the dotted line for a fight with ‘The Eagle’ many assumed the fight was all but set-in-stone.

Now however, with Alvarez set to fight Conor McGregor, the MMA community has begun to call UFC 205 the most stacked card in MMA history!

Following the announcement of the fight, Twitter went wild. Below are some of the best reactions from members of the MMA community in regards to the fight:

Cat's out of the bag, Conor vs Alvarez for UFC 205. That leaves a lot of options, who do y'all wanna see me fight next?

No man has ever been UFC Champion of 2 different weight classes at the same time. #HistoryMaker pic.twitter.com/ZEwM6DlKJX

I feel for the Russian not getting to fight for the title but it's what the fans want, McGregor will KO Alvarez with a nice counter shot 👊🏻💣