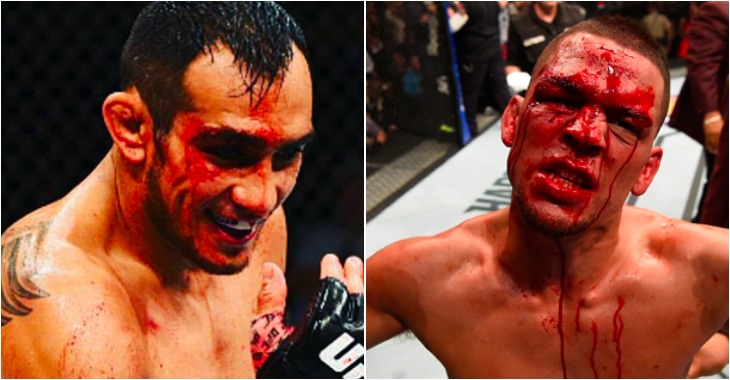 With Khabib Nurmagomedov on the shelf until the fall, streaking lightweight contender Tony Ferguson has been angling hard for a fight with fan favorite Nate Diaz. On Monday’s edition of The MMA Hour, Ferguson’s callouts of Diaz continued.

Speaking to host Ariel Helwani, Ferguson poked fun at Diaz’s biking hobby, and urged the Stockton based fighter to get back in the cage.

“He wants to talk about doing this biking thing, you don’t even own a Harley, you got a Schwinn bike,” said Ferguson (via MMAMania.com). “You have got no heart. You call yourself gangster? You’re backing out from a fight. Let’s go dude. We’ve got a main event that’s open that needs to be filled. So if you want to make some money and impress the fans, want to get back out there and sell your weed, that’s great. Sign on the dotted line and put your name back out in the crowd. Let’s go kid.”

“You’re a bitch,” Ferguson continued. “I don’t know what his problem is. I understand you said McGregor, I’m not going to do your dirty work for you. I don’t want to have to go into name calling, I don’t want to do that, but if you’re a fighter in this organization, and you said you’d rather go ride a bicycle, you got better things to do? That’s cute. That’s real cute.”

“I might as well Stockton slap the shit out of you. I’m from the 805, I’m tough. And I don’t have to talk about how tough I am, but I am a hell of a lot tougher than that dude.”

Do you want to see Tony Ferguson and Nate Diaz fight? What do you think it will take to get Diaz back in the cage? Make your opinions heard in the comments section!