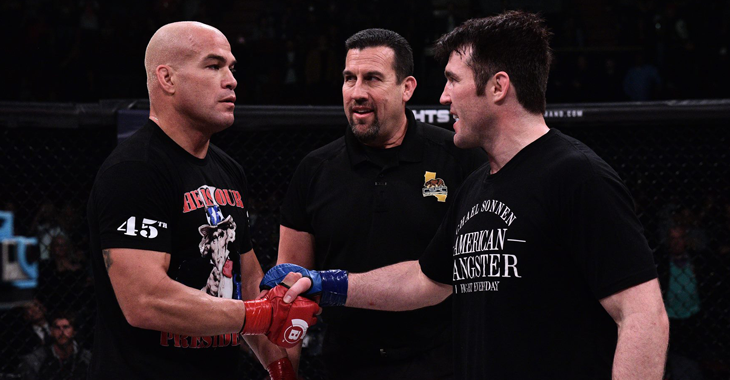 Back in January, in the main event of Bellator 170, three-time UFC title challenger Chael Sonnen returned from a lengthy hiatus to take on retiring MMA legend Tito Ortiz. Though Sonnen was able to threaten Ortiz with a submission attempt in the early moments of this fight, he ultimately found himself locked up in a rear-naked choke mid-way through the first round, and was forced to tap as a result.

Unfortunately for Ortiz, this win was marred by controversy, as many fans suggested Sonnen threw the fight, and Sonnen later suggested Ortiz verbally tapped to his early submission attempt.

“Tito tapped in that fight,” Sonnen said. “I knew Tito tapped when he tapped. I heard Tito verbally tap and I’ve never said a word about it, privately to Tito at the press conference or to you guys. I never said anything and the reason is, first off, when you lose, you just take your loss. It’s not a tap if the referee doesn’t call it a tap so therefore, Tito didn’t tap. I thought he tapped, and I let a move go. He verbally tapped, and I never said anything about it and the reason was, he quit the sport five seconds later. He quit the sport five seconds after I tapped and he quit the sport a minute and five seconds after he tapped. There was no rematch. There was nothing to build and no reason to tell the real story.”

Ortiz, of course, quickly suggested this claim was nonsense, and didn’t hesitate to give Sonnen a piece of his mind for suggesting such a thing.

“[Chael Sonnen] is a liar, cheater and a fraud!” Ortiz said on Twitter “Proof is in his history.”

What do you think of these claims from Chael Sonnen? Is Tito Ortiz’s scathing comeback warranted? Sound off, PENN Nation!