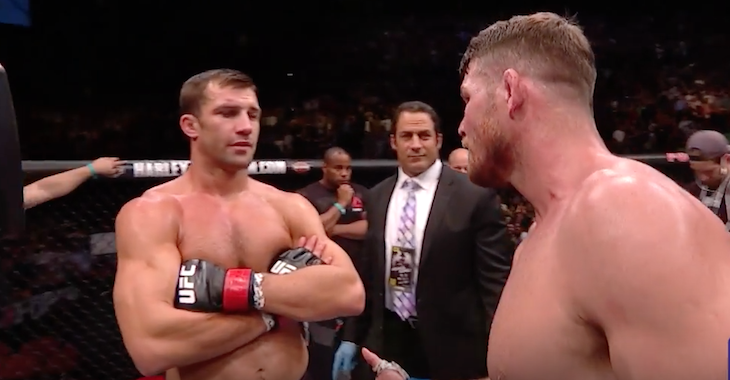 Back in June of 2016, a widely unheralded Michael Bisping shocked the world by clubbing Luke Rockhold to a first-round knockout, capturing the UFC middleweight title as a result. Since this win, Bisping has defended the middleweight title with a hard-fought decision win over the retiring Dan Henderson. Rockhold, meanwhile, has not been seen in the Octagon since.

It is worth noting, of course, that Rockhold was briefly scheduled for a November rematch with Ronaldo “Jacare” Souza, but was unfortunately forced out of this fight with an injury. Despite the legitimate reason for Rockhold’s lengthy absence from the cage, however, Bisping doesn’t believe he’ll ever return.

“What is Luke Rockhold doing?” Bisping said on Monday’s edition of The MMA Hour (via MMAFighting.com). “When did he say he’s going to fight again? What are his plans? I do believe we are now almost in March. That fight was in June. I don’t know what happened there, but I think I took his soul. I don’t think we’ll ever see Luke Rockhold again. I beat the sh*t out of him. I don’t know, I think he’s done. The way he went down, I think so. Why hasn’t he fought again?

“A lot of time has passed. If that were me [that lost], I would’ve been right back in there.”

Bisping then commented on Rockhold’s frequent travels, suggesting the former champ has grown accustomed to a lavish lifestyle that doesn’t include being punched in the face.

“So it’s not bad enough that he needs surgery, but he needs, what, he needs nine months to go travel the world and be a playboy? That doesn’t sound like a man who wants to be champion again to me.”

What do you think of these comments from Michael Bisping? When do you think Luke Rockhold will return to the cage? Sound off, PENN Nation!