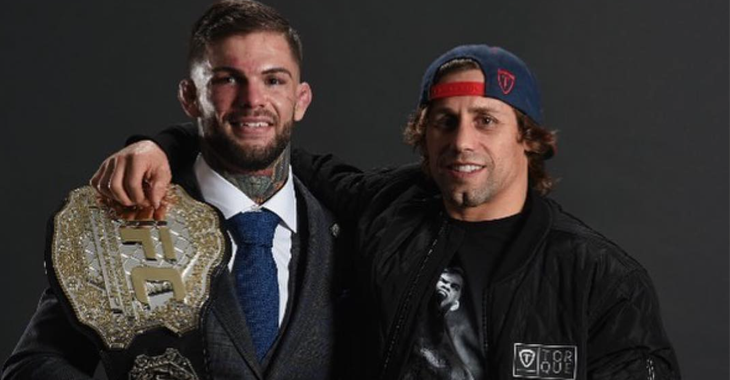 Team Alpha male, which is based in Sacramento, California and headed by recently retired MMA legend Urijah Faber, has long been one of the best camps in MMA. And from the sounds of it, it’s about to get even better.

Speaking on Monday’s edition of The MMA Hour, Faber broke the news that Team Alpha Male had inked a new deal with a corporate sponsor that will provide some impressive new benefits for its coaches and fighters. His words:

“He stepped up big-time and put up a substantial sponsorship for our team, including salaries for our coaches,” he said. “We’ve always been a self-funded team. The guys pitch in and pay cash to pay for the coaches. Now we’re going to be able to make them more comfortable so they can be hands-on a lot more, spend more time with the fighters, be more involved and make this team even better.”

“We have a scholarship program now, where we’ve got a little bit of a recruiting budget,” Faber added. “We’ve got guys that we’re trying to pull in and build the team throughout, from 110-pound, 105-pound girls to heavyweight guys. We’re looking to grow the team and make the best team in the world through and through.”

“He’s also incorporated a discretionary bonus system, which has kind of gone away with the new ownership of the UFC. You may just end up with a check in your mailbox. That’s how it used to be for the UFC. If Dana White or Lorenzo felt that somebody did something inspiring, they would get a check out of the kindness of their heart. We’re incorporated something very similar here. We already had our first round of our established guys getting awards, which was pretty cool for them.”

“We’re kind of getting a curriculum going on kind of the business life, coaching people through financial stuff with the real-world. Goal-setting and things like that. We’re creating a real curriculum to get these guys going in the real world after the fight game.”

“The last thing is we have our own aviation partnership now,” he concluded. “So, private flights for fight-related things, for friends and family and teammates while we’re going across the West Coast on the fight team.”

What do you think of this new deal for Urijah Faber’s Team Alpha Male?