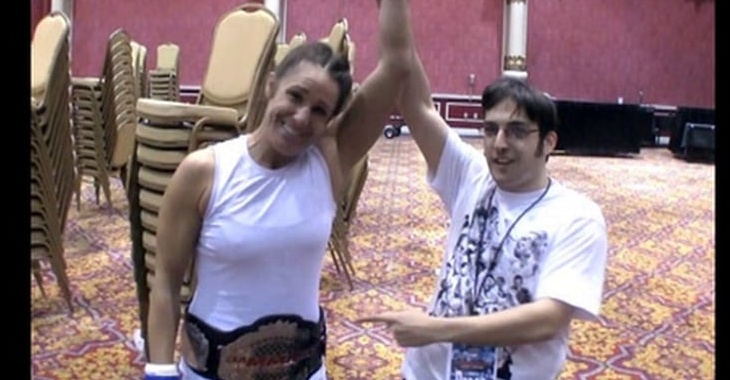 If you haven’t been following the women’s scene in Mixed Martial Arts consistently for the past two decades, then you probably aren’t likely to know who Tara LaRosa is. Perhaps you may have watched season 18 of The Ultimate Fighter which was the first season to ever feature female fighters. LaRosa attempted to get onto the show but fell short in the elimination round to current UFC Bantamweight, Sarah Moras.

LaRosa is about as seasoned of a fighter as one can be. Especially when it comes to the women. She’s been fighting since 2002 and her next opponent…literally hasn’t been fighting for any time ever(unless you count his surely incredible street fighting record). A man by the name of Kristopher Zylinski has made claims on a public article that a trained female fighter would lose to an untrained man if they were to fight. Well…he’s not the first one to do so, that’s a guarantee. But, luckily(or unluckily), Zylinkski has been man enough to actually accept to prove this challenge as offered up by the McDojoLife.

Initially, this wasn’t supposed to be LaRosa’s fight. But after two opponent changes that occurred both from eye injuries(very strange coincidence…I know), LaRosa caught wind of the event and joked about wanting to step in but then it turned serious. LaRosa made this comment on the event’s page:

A friend tagged me in on the search for a replacement and I responded as a joke… welp, I guess shit got real, so here I am! I feel like I should say something like “hey, hold my beer for a second” or “hey y’all, watch this” in my best redneck accent. It fits. I’m part redneck. So, I guess… here we go!

If you don’t know me, I’ve been training in martial arts since 1995. I got into Shotokan karate in hs, and then got involved with Judo in college. I placed 2nd at collegiate nationals in 2001. Shortly after, I started training in Brazilian Jiu-Jitsu and MMA (which was referred to as NHB back then).
I had one amateur fight and my mom got scared, and said you’re moving with you’re auntie and uncle in Bel-Aire… wait no, that was Fresh Prince. 🤦🏻‍♀️
So I had an ammy fight Nov 2001, then went pro in April 2002. I’ve been training and fighting ever since.
If you want more, check wiki. Also, I’m on twitch almost every weekday from 2:30-5:30pm, so come in and ask me anything! Follow me on twitter for better interaction, I’m not very good at FB lol
Welp, that’s me! …so, here goes nothin’! 👊

The first two opponents for Zylinski were Anna Dempster(7-0, amateur) and Sarah Patterson(5-3, pro). LaRosa has more experience than both combined which makes this even harder for Zylinski to overcome.

The sparring match will go down this Saturday, January 6, and it can be watched for free on the McDojoLife Facebook page. A GoFundMe is active and all the funds are going towards paying for costs of the event and as a fight bonus for LaRosa who is filling in on short notice.

Will you check out the match? Will it even end up happening?