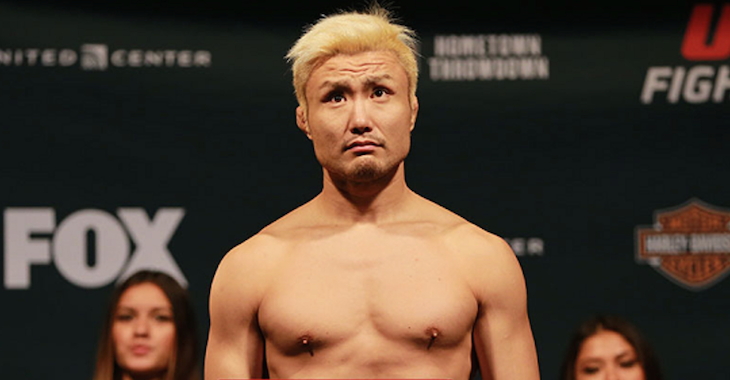 When PRIDE legend Takanori Gomi arrived in the UFC back in 2010, he was viewed as a legitimate threat to then champion BJ Penn, and to all of the lightweights on the UFC roster. Unfortunately, the Japanese MMA icon’s UFC career has been a significant disappointment.

Barring a few impressive moments, like a 2010 KO of Tyson Griffin, and a 2014 war with Isaac Vallie-Flagg, Gomi has looked quite unspectacular in the Octagon. Most recently, he’s endured a brutal stretch of losses, having been stopped by Myles Jury, Joe Lauzon, Jim Miller, Jon Tuck and “Maestro” Dong Hyun Kim in his last five bouts.

From the looks of it, this rough skid has led the UFC to release Gomi from his contract. Gomi suggested this move in a Monday morning post to Instagram, but also eluded to a return to the Japanese MMA ring this New Years Eve – perhaps at Rizin Fighting Federation‘s End of Year show, or at Inoki Genome Federation’s New Years Eve event.

“Return to the ring of Japan soon,” Gomi said in his post.  “#NewYearsEve”

At the height of his career, Takanori Gomi was considered one of the best lightweights on earth. The Japanese star, whose sporting career began on the baseball field, seemed to have c4 packed into his gloves, as he authored violent stoppage wins over fighters like Ralph Gracie, Jens Pulver, Hayato Sakurai, Mitsuhiro Ishida and Duane Ludwig.

While Takanori Gomi appears to have found a new home in one of Japan’s top promotions, his string of recent knockout losses remains worrying. Do you think the Japanese lightweight would be wise to hang up the gloves rather than continue fighting? Join the conversation in the comments section!