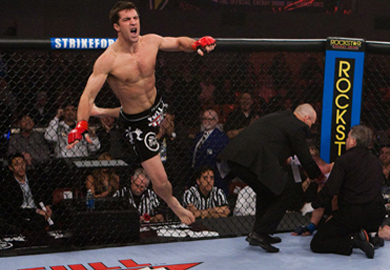 STRIKEFORCE heads to the Chesapeake Energy Arena in Oklahoma City, Okla., on Saturday, Jan. 12 with three championship fights, plus the return of Oklahoma State University star Daniel Cormier, all televised live on SHOWTIME. With a collection of some of the best fighters in the world today, STRIKEFORCE has put together a memorable and historic card for the fans in the Sooner State.

“We’ve built an absolutely stacked card for Oklahoma City and the SHOWTIME viewers,” STRIKEFORCE CEO Scott Coker said. “We have three awesome title fights featuring some of the best fighters to ever grace the STRIKEFORCE cage. Plus, we have Daniel Cormier, one of the fastest-rising heavyweight stars today, returning to his roots in Oklahoma to fight Dion Staring. January 12 is going to be a really special night.”

“The biggest stars in STRIKEFORCE are putting their titles on the line in competitive fights,” said Stephen Espinoza, Executive Vice President and General Manager, SHOWTIME Sports®, “and that is precisely what fans of STRIKEFORCE on SHOWTIME have come to expect.  We are excited to be part of the event.”

The event will serve as the last in STRIKEFORCE history.