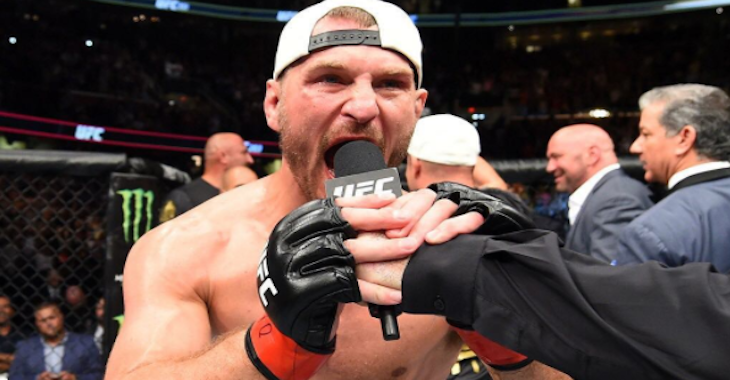 The last time we saw a UFC heavyweight title fight was back in May when champion Stipe Miocic successfully defended his belt against Junior dos Santos. In doing so, Miocic scored another first-round finish and avenged a 2014 decision loss to dos Santos.

With Francis Ngannou’s insane highlight knockout over Alistair Overeem that took place over the weekend at UFC 218, the rising heavyweight knockout specialist has earned a shot against Miocic.

According to ESPN’s Brett Okamoto, the heavyweight title fight matchup between the two heavy-handed athletes is moving along with negotiations to take place at UFC 220 in January.

Okamoto tweeted the following on Wednesday:

“Heard some positive updates on Miocic vs. Ngannou today … not quite 100% as of this moment, but we’re getting closer to a Jan. 20 date at UFC 220 in Boston.”

Heard some positive updates on Miocic vs. Ngannou today … not quite 100% as of this moment, but we're getting closer to a Jan. 20 date at UFC 220 in Boston. Stipe Miocic is 17-2 and became the UFC heavyweight champion by knocking out Fabricio Werdum in the first round at UFC 198 in May of last year. Miocic then defended his belt against Alistair Overeem at UFC 203 in September, winning by knockout in the first round and then went on to beat dos Santos in May.

Francis Ngannou holds an 11-1 professional MMA record and has gone undefeated in the UFC, finishing all of his opponents within two rounds. Ngannou’s recent KO over Andrei Arlovski and Overeem have catapulted the native of Cameroon to the top of the UFC heavyweight division. Who are you picking to win this UFC title fight between the two heavy-handed beasts? Let us know in the comment section how you see this one going down!