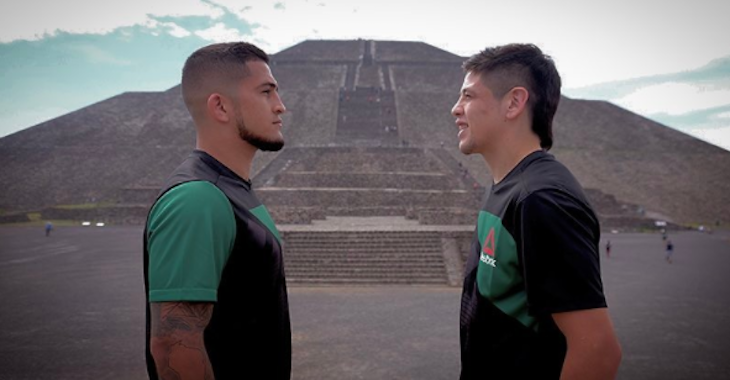 Last night, the UFC touched down in sun-soaked Mexico City, Mexico, with an exciting night of fights. In the main event, we were treated to a clash of young flyweight contenders, as Duke Roufus trained Sergio Pettis took on Mexico’s own Brandon Moreno. Though both fighters are very young – both 23 years old – this looked like it could be a flyweight number one contender fight, with the winner earning a shot at incredibly dominant champion Demetrious “Mighty Mouse” Johnson.

In the end, it was Pettis that earned the win, braving some early adversity to recapture the momentum, and ultimately a unanimous decision win. Surprisingly, however, his immediate focus is not on a flyweight title shot.

“I’d like to fight again,” Pettis said when asked if he’d like to wait for a shot at the winner of Mighty Mouse’s upcoming scrap with Ray Borg (h/t MMAJunkie.com). He then explained that he’d instead like to fight former flyweight title challenger and Olympic wrestler Henry Cejudo.

“I feel like me and Cejudo should go at it again.”

Pettis and Cejudo were scheduled to do battle at UFC 211 back in May, but Cejudo was forced out of the fight just days ahead of time.

“He kind of pulled out two days before, and I want to still touch that face,” Pettis said.

How do you think Sergio Pettis would do against Mighty Mouse?