Second fighter in two days is murdered in Natal, Brazil 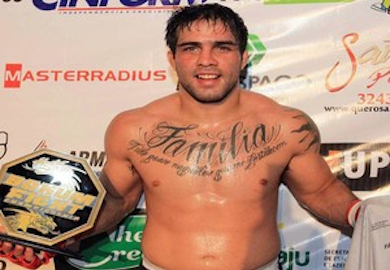 On Monday morning, Brazilian welterweight Luiz de Franca (3-0 MMA) was shot dead inside a BJJ and fitness Alta Performance gym in Natal, Brazil. Alta Performance houses Kimura Nova Uniao, which is an affiliate of the famed Nova Uniao gym. Franca’s alleged attacker was a police officer who he had recently expelled from the gym for street fighting.

Sadly, on Tuesday night the bad news continued, as another fighter Guilherme “Kioto” Matos Rodrigues was found murdered in the same city. The 30 year-old Rodrigues, who is a member of the Pitbull Brothers team, was found shot in a juice shop.

Guilherme Cruz has the story via MMAFighting:

According to the police, two men approached in a motorcycle and shot at “Kioto”.

Rodrigues was rushed to the hospital, but he died during surgery.

“I can’t imagine why someone would do that to him,” Rodrigues’ teammate and Bellator fighter Patricio “Pitbull” Freire told MMAFighting.com on Wednesday. “He was a handsome guy, everybody knew who he was, so maybe someone was jealous of him. He trains with me for 12 years, and I never saw him getting trouble with anyone.”

Rodrigues (19-9) competed against some of the best fighters in the Brazilian circuit, including UFC veterans Ronys Torres, Iliarde Santos, and John Teixeira da Conceicao.

The police have no suspects of the crime thus far, according to Freire.

This article appeared first on BJPENN.COM
Previous articleLucas Martins forced off UFC 170 card with an injury
Next articleVIDEO | Munoz Does His Own Version Of Wrecking Ball By Miley Cyrus
© Newspaper WordPress Theme by TagDiv