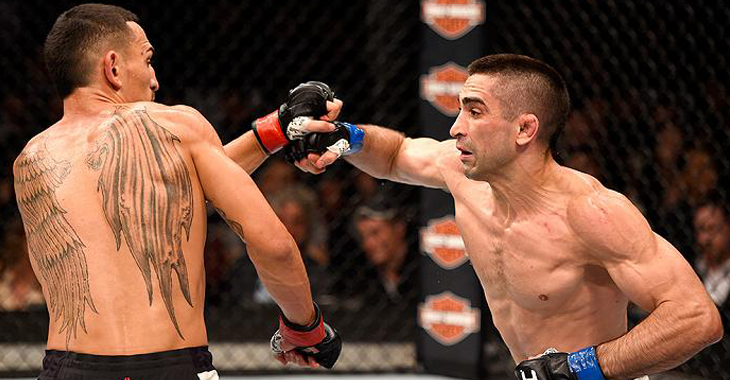 Frankie Edgar challenging Max Holloway was a fight everyone wanted to see. The two somehow haven’t fought yet and Edgar — along with Chad Mendes — were perpetually switching out for the second best featherweight in the world next to Jose Aldo. When an injury forced him out of his third chance at the title at UFC 218, the former champ was subbed in for a rematch with Holloway. Cub Swanson was in the running for awhile, but one name missing from the equation was Ricardo Lamas. He opened up about the scenario in a recent interview with Luke Thomas.

.@RicardoLamasMMA explains why he should have been in the running for a title shot against Max Holloway#TLTS@lthomasnews pic.twitter.com/Dn6YlvC5dE

“Jose [Aldo] was the champ so I kind of understand why he got it over Cub [Swanson], but out of the three of us I was the only one who wasn’t finished by Max Holloway. So, I feel like I should have been in the running for it too. I’m coming of a two-fight win streak, two finishes in a row, I have the second-most finishes in the featherweight division, only behind by one to Max Holloway. I just feel disrespected that I wasn’t even in the conversation for it. They knew we wanted it. I made it vocal on Twitter and it was going around and they knew I wanted the fight.”

“I think they were just scrambling around. I think the reason Cub didn’t get it is because he’s trying to renegotiate his contract and I think they just didn’t come to terms for what he wanted to fight Holloway and so they gave it to the former champ. I think maybe because I’m not one of these guys that is willing to make an ass of himself, you know? I don’t like the way the whole sport is going. Everybody is trying to be like Conor McGregor now and it seems really phony to me when these guys come in an put on this big act. That’s not me. That’s not what I’m about. I prefer to talk in the cage which I feel like I’ve done my entire career and I feel like that should be enough.” —Ricardo Lamas on MMA on SiriusXM.

It was Jose Aldo that Ricardo Lamas was supposed to rematching at UFC Winnipeg, now that the UFC has pulled him out of their fight to to challenge Holloway, he’s left with no opponent. As Lamas said, he also fought Holloway back at UFC 199 and is the only fighter out of Aldo and Swanson respectively who wasn’t finished by the Hawaiian. No inkling yet of any possible opponent. The other big contender in the division, Brian Ortega, remains matched up against Swanson at UFC Fresno.

Just spoke to Ricardo Lamas. He’s trying to stay positive, but puts the chances of him staying on #ufcwinnipeg card as 50/50.

Still doesn’t know if he’ll even get an opponent for next month.