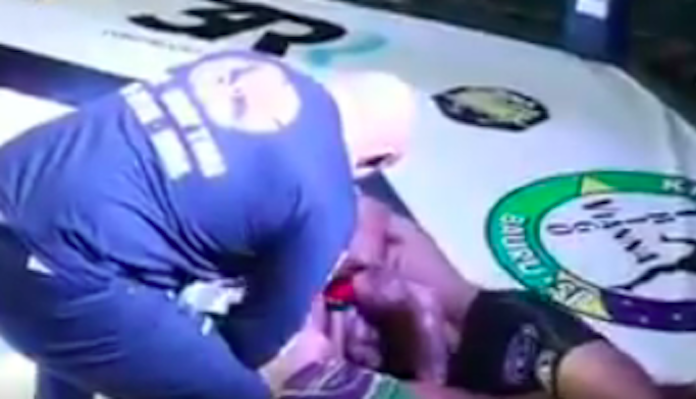 On Saturday night, at Daredevil Fight 13 in Bauru, Brazil, an MMA fighter named Melquizael Costa was nearly killed thanks to the complete and inexcusable incompetence of the bout’s referee.

In the third round, Costa’s opponent Rafael Barbosa locked up an anaconda choke. Costa then clearly slipped into unconcious, yet the referee did not intervene. Even when Barbosa protested, telling the referee that Costa was out, the fight continued.

It was a truly terrifying display that could have ended in tragedy.

Speaking to MMA Fighting‘s Guilherme Cruz this week, Melquizael Costa looked back on the choke that could have killed him. In his eyes, he likely would have died were it not for his opponent ending the fight himself.

“He locked the anaconda choke, and when I turned to the wrong side, I went out,” Costa said. “The first thing I remember is opening my eyes and seeing my coaches and a doctor over me, calling my name, and I couldn’t breathe. It was agonizing. I only came back to normal when I got to the hospital and they gave me some serum.”

“I saw in the video that I went out and my eyes were open,” Costa continued. “You might think I’m awake, but I was already out. I moved a couple of times, but I was having seizures. My corner and his corner yelled that I was out, but the referee said he would only stop the fight if I was out. And I was! Every referee touches the fighter to see if they are out, but he never touched me. My opponent stopped the fight. Otherwise, I would be dead.”

After spending Saturday night in the hospital, Costa was discharged. He will continue to undergo tests, however, to determine if any long-term damage was done to him.

That is one of the most sickening things I have ever seen in MMA!!!! That referee has no idea what he is doing and could cause a death due to his ignorance and incompetence. This is why MMA needs a worldwide governing association that could handle such outrageous negligence https://t.co/bN83YYOHQw