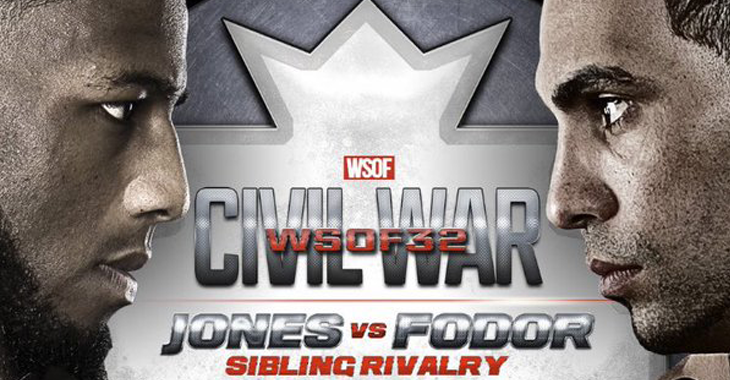 Two brothers are set to fight against each other in the cage at WSOF 32.

To make this fight even more intriguing, one of the brothers is a masked self-made crime-fighter based in Seattle.

Yes, this is real.

Former UFC and Strikeforce fighter Caros Fodor and brother Ben Fodor who also goes by his alter ego “Phoenix Jones” are set to fight one another at WSOF 32.

“One hundred percent, it’s going to make our Mom cry,” Jones told Yahoo. “That’s a guarantee. But we’ve been circling each other for years. This was inevitable.”

The brothers admittingly don’t get along, but Caros says, “It’s kind of surreal that this is really happening.”

Regarding his adopted brother’s crime-fighting routine, Caros says that he thinks that it is simply to get attention.

“It’s [strange],” he said of his brother’s character. “I think it’s a gimmick for attention, if you want to know the truth. He started out meaning well, but, I don’t know. You know, I don’t even like Marvel comic books. I can’t read the super hero stuff. I just don’t understand it. I’m not belittling it, but I don’t get it.

“The fact he does it, wow, I don’t know. I guess if you know Ben, it makes sense that he does it.”

As for Jones’ role as a crime fighter, he says he is simply trying to help people.

“As weird as this sounds, I have to pretend to be Ben more than I have to pretend to be Phoenix,” he said. “If something bad happens, I know what I’m supposed to do. Like, the other day, I was out with my girl and we saw a car accident. I pulled over, got my medical kit out of the car and ran down the street. The cops showed up and they were like, ‘Oh hey, Phoenix, what’s going on?’ I explained the situation to them. The fire department showed up, EMTs I’m cool with.

“That’s what I do. I stop fights. I stop problems. I help people. It’s who I am. It’s what I do. MMA, fighting and being Ben Fodor, that’s hard for me.”

Regarding the match, the two brothers have seemingly different thoughts on the fight, but both agree that they aren’t surprised that it is happening.

“I suspected for a while that it was eventually going to happen, but it’s coming at a good time because we’re not getting along very well,” Caros said. “I’m excited. My career has been up and down and so this will be a good fight for me. I can get in there and make some money.”

Jones seems to take a little more to heart with concerns for his mother’s thoughts on the match, but says he took the fight more based on his passion for the art of fighting.

“My friends, the people who have known me, when they heard I was fighting Caros, they said, ‘Makes sense,’ ” Jones said. “But if you think I’m going to make my Mom upset, the person who gave me a chance in life, for some amount of money and I don’t feel the passion about it, then you’re an idiot.”