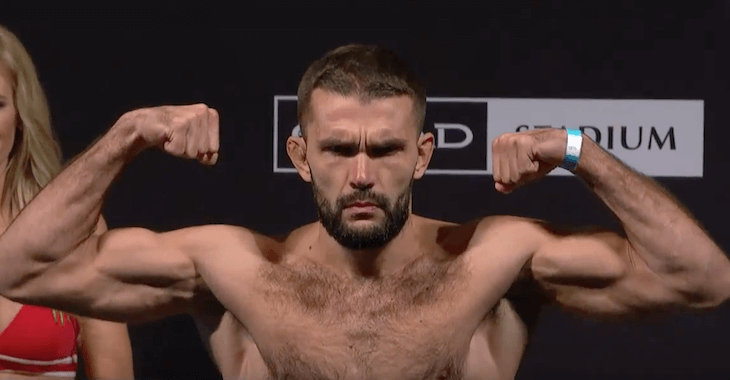 UFC welterweight Peter Sobotta was born in Poland and raised in Germany. Because of this, he feels an allegiance to both countries. Unfortunately, this dual-allegiance tends to make things difficult when Sobotta has to decide which country to represent for his UFC bouts.

“So this question, ‘Are you Polish or are you German?’ – I really don’t like this question, because I have two hearts,” Sobotta explained in a recent interview with The Sun. “I have this Polish side and this German side, and whatever I say, someone gets annoyed because of this.”

To combat this dilemma, Sobotta has come up with an interesting solution. From now on, he won’t be representing Germany or Poland when he fights. Instead, he’ll rep Jamaica.

“I’ve chosen to represent Jamaica in the future so nobody will ever ask me this question,” Sobotta explained. Unfortunately, Sobotta didn’t announce this change in time to have the colours changed on his Reebok Fight Kit for his Saturday bout with Nicholas Dalby, but he says you will see the Jamaican flag on his side of the bout’s Tale of the Tape.

So, why did the Polish-German fighter decide on Jamaica, a country that sits more than 3500 miles to the Southwest of his European homelands, and a place he has never visited?

Luckily, Sobotta does have plans to visit the island nation in the near future.

“I’ve never been to Jamaica, but I’m going there in December,” he said. “I’ve met a lot of Jamaican people and I just love their approach. I like how they are, they’re very chilled and very easy, very open.”

What do you think of Sobotta’s strange, allegiance switch? Sound off, PENN Nation!