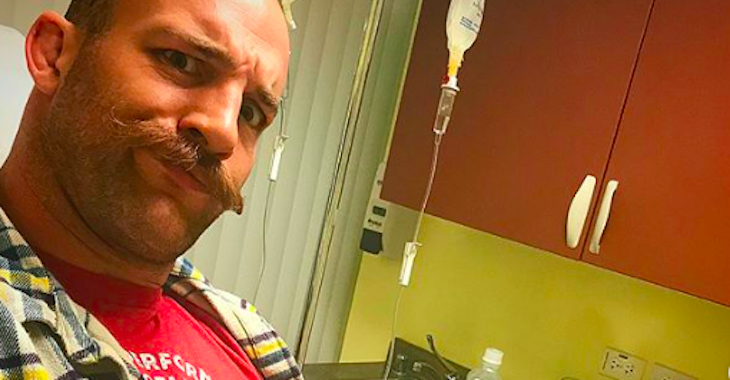 10th-ranked UFC light heavyweight contender Patrick Cummins was expected to return to the cage against 7th-ranked light heavyweight contender and fellow wrestling specialist Corey Anderson on the undercard of the stacked UFC 217 this November 4th. Regrettably, Cummins has been forced off the card with a “mutant staph infection” that he claims not even IV antibiotics are combatting.

Cummins shared this unfortunate update on his social media channels, along with a pair of photos that show him hooked up to an IV bag with a brutally swollen leg.

Patrick Cummins is currently on a two-fight streak, having recently picked up decision wins over fellow contender Gian Villante and Jan Blachowicz. This streak, meanwhile, was preceded by a pair of losses to Antonio Rogerio Nogueira and Glover Teixeira.

Corey Anderson, meanwhile, has not fought since March, when he was brutalized by British knockout artist Jimi Manuwa. This loss was preceded by a win over Sean O’Connell. At the moment, no replacement opponent for Anderson has been found.

Here is the UFC 217 bill as it currently stands: