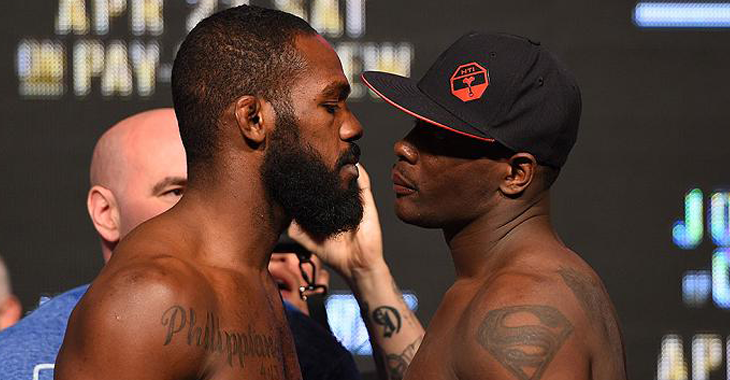 Ovince Saint Preux is about to gear up and fight Mauricio “Shogun” Rua  in Japan, but there is another fight still in the back of his mind. Back at UFC 197, Saint Preux jumped in to replace Daniel Cormier and fought Jon Jones for an interim UFC light heavyweight title. Losing the bout and suffering a broken arm in the process, OSP took the loss hard but moved on. However, the recent controversy over Jon Jones’ drug test has all of the feelings rushing back. Was Jones’ allegedly on performance enhancing drugs during their fight as well? Saint Preux wants to know the answers.

“I mean, I did an article a while back saying, I just wanted [Jon Jones] to tell the truth. But at the end of the day, with me, I just wanted to know. But at the end of the day, what can I do about it? It’s a situation where I’ve learned, especially like my fight when I fought Volkan. You know, I walked in the locker room and I caught myself screaming, and I was like, why am I mad for? I mean, I did everything I did, I poured my heart out in the fight, you know, I trained hard, I felt like I won the fight.”

“Maybe [it would bring me closure], maybe not. Cause at the end of the day it’s like, can I dwell on it? Yeah. But if I was dwelling on it, I’m holding onto the past and there’s no reason for me to do that. So, my mindset is always going to be to be like, I’m here in the present, concentrate on present. Cause whatever is gonna’ put me in the present, however I perceive myself right now, then the future’s gonna be that much better.” — Ovince Saint Preux via Submission Radio.

It’s hard not to think about your previous fights, especially when information like with Jon Jones comes out, but Saint Preux is right: No reason to hold onto the past. As far as the future, his rematch with Shogun goes down September 23, 2017 at UFC Fight Night 117. OSP won their last encounter by a TKO in the very first round.

The article that Ovince Saint Preux mentioned in the interview above took place with MMA Fighting after Jon Jones was pulled from UFC 200, citing another potential anti-doping violation.

“On June 18th, Jon Jones was caught taking Post Cycle Therapy (PCT) drugs. This means he was on some form of Performance Enhancing Drugs before this date. The only real questions are: When did he start taking them? Was it before his fight with me or after? There are not many people who can answer this question, but Jon Jones is one of them. So, I am asking: When did you start taking PEDs, Jon? I wanted to fight the best fighter in the world, but I did not sign up to fight a cheater. So, be a stand up person, tell us all the truth.  We all know you were on PEDs because you got caught taking PCT drugs. Just tell the world the truth.” – OSP speaking to MMA Fighting last year.