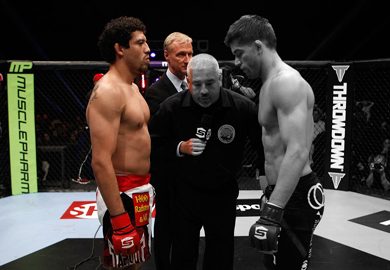 The mixed martial arts community has been in an uproar ever since it was announced that Gilbert Melendez retained his title in a win over Josh Thomson by way of split decision. Whether people are defending the fact that the judges made the right call or arguing that Thomson should have won (like this fan who was booing in Gilbert’s face after the decision), fans have been vocal on message boards and Twitter about their points of view.

If there is one thing challengers to the titles should have learned by now, it’s that they should never leave the fight in the hands of the judges. There have been too many instances where a controversial decision arrises and the “wrong” fighter wins or there is no winner at all with the result of a draw. You have twenty-five minutes to either finish the fight or convince the judges that you should take the championship home. There are certain qualifications that you need to fulfill in order to do that: effective striking, effective grappling, control of the fighting area (cage control) and effective aggressiveness and defense. Taking all of the aforementioned factors into consideration and after analyzing the fight round by round, two of the judges made the right call by giving Gilbert Melendez the victory.

There could easily be arguments made for why each fighter should be the Strikeforce Lightweight Champion right now. Gilbert Melendez was riding a wave of momentum walking into this fight and was active from the get-go with his counter punches and takedowns. Josh Thomson, looked at as the underdog, took many by surprise when he was able to weather the storm from the champion early on and get the upperhand later in the fight, leaving Melendez with an almost closed eye. Unfortunately for both men, momentum, the element of surprise from an underdog, and visible exterior damage do not matter in the final decision of the fight. Although fans stick to their emotions (and they should because that’s what fans do), the judges at cage-side are professionals and get paid to be emotionless while watching the fight, strictly scoring the bout based on what the rulebook tells them what to judge it on.

Melendez put on a brilliant performance in rounds two and three. He out-grappled and out-struck his opponent all while controlling the center of the cage aggressively. There was even a point where Thomson landed a trip-takedown, but Melendez’s defensive awareness was so high that he rolled backwards to his feet and stood up before Thomson even knew what was going on. Anything that judges take into consideration scoring a round, Gilbert had the upperhand in.

Rounds four and five were similar stories, but only this time it was in favor of Josh Thomson. While Melendez could have had the advantage with strikes in round four, Thomson negated them when he almost sunk in the rear naked choke three times. For the final five minutes of the fight Thomson essentially dominated, out-landing his opponent in significant strikes 23 to 11. It was an impressive two rounds for the challenger.

For anybody who watched the fight, it was clear the final four rounds gave each fighter two rounds a-piece. Ironically enough, it was the controversial first round that decided the outcome of the whole fight.

The first round started off even; neither man landed power shots but they were tagging each other up pretty good. Thomson landed a couple decent knees, but none of them landed flush because Melendez was backing up as they connected. The first major event of the round took place 1 minute and 30 seconds into the fight where Gilbert secured his first takedown. Although Thomson’s back was against the cage, Melendez stayed active while he kept striking as he tried to advance to a better position. Back to their feet they were at another stalemate, both connecting with decent shots. Even though both men had their backs close to the cage their fair share of the time, Melendez was the one who was aggressive and would use it to his advantage. Thomson often passed up the opportunity of putting the pressure on, while Melendez would accelerate and throw combinations that left Thomson with nowhere else to go except into the fence with no room to answer with a combo of his own. Melendez capped off the end of the round by catching a body kick that turned into a brief takedown where Melendez landed a hammerfist before the horn sounded.

With zero knockdowns and only three brief takedowns, it’s hard to watch the first round and say who the winner was. If we’re going by the book, however, Melendez used effective grappling, effective aggressiveness and control of the fighting area to his advantage in order to walk back to his corner after the first with the score 10-9 being in his favor. The effective striking was even and both men were being very defensive, reacting to each and every feigned strike.

Championship fights ending in a controversial decision isn’t always ideal for the fans. The rubber match in a trilogy fight ending in a controversial decision is even worse. Combine the two, and it’s easy to understand why some fans are so vocal about their outrage. It looks like this will be the final bout (for now) between the two though, as Melendez seemed to have squashed the opportunity of a rematch in both his post fight interview and the post-fight press conference.

Do you think Gilbert Melendez or Josh Thomson won? Do you want to see a rematch? Tell us in the comments below!